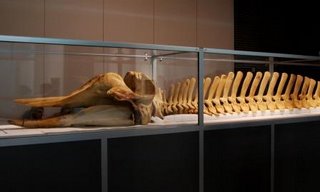 The presence of a female Northern Bottlenose whale in the Thames last January was a major media event which drew thousands to the riverside for a brief glimpse of her. Despite a rescue attempt she died on 21 January during her third day in the river. 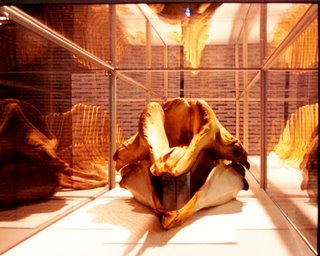 The Sun newspaper launched a campaign to raise money towards the cost of preparing and storing the bones at the National History Museum and they are now looked after in its scientific research collection. This week the skeleton has been on display at the Guardian/Observer Visitor Centre. It will then be returned to the museum's research collection which is not on display to the public. Due to the rarity of the species, it ise the first complete Northern Bottlenose Whale skeleton to enter the UK's national collection of animal skeletons. 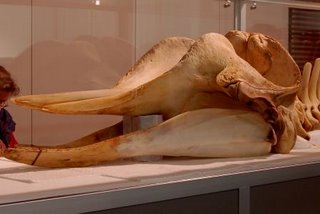 It was not easy to take photographs: a reflective glass case, no flash photography allowed(not a bad move with a reflective case come to think of it) and no tripod. Ah well at least I was able to salvage a few shots

Did Prince Charles go to the exhibit? After all, isn't he... nah. Even I can't stoop to a pun that low.

LOL Steve. There are no lower limits to the puns permissible here!

Well, as tragic as the tale played out, we can still be thankful that it was too depressing for Disney to seize upon it and make a crappy movie along with endless sequels ala "Free Willy" Part I, II, III, IV, XXIII......and so on.

Did you go to watch the whale goings on too, jams?

I wasnt able to get down to see it sadly or I would ahve been rubbernecking too! You're right.. we've dodged a bullet with the Disney film!