We hate it when our friends win Eurovision 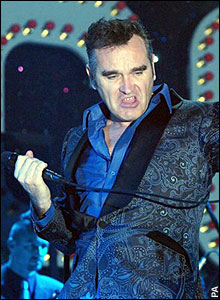 It was confirmed yesterday that the BBC was in talks with Morrissey to pen Britain's Eurovision Song Contest entry. Last year he expressed an interest in entering the annual festival of high camp, banal lyrics and trite melodies (Eurovision is a train wreck indeed but - but a most entertaining one)but most people assumed he was joking. In the wake of another lamentable performance from the UK Morrissey said: "I was horrified but not surprised to see the UK fail again in the Eurovision Song Contest. And there is one question I keep on asking: 'Why didn't they ask me?' That question keeps going round my head."

The BBC, given him the task of finding a British entry that is traditionally chosen via a viewer vote, took him at his word. A BBC spokeswoman said: "Morrissey has expressed an interest and we are in talks with him as well as other people. But nothing has yet been confirmed."

WHOOOOAAAA! Time has not been kind to our friend, Morrissey. I wouldn't advise ignoring him though, because the more you ignore him the closer he gets! There is a light that never goes out except tomorrow. The boy with the thorn in his side teams up with bigmouth strikes again to declare that meat is murder.

I used to date someone also named Steven Patrick just like Morrissey. He considered himself to be the Second Coming Of Morrissey too, Houston style. I wonder what he looks like now? Hmmmmmmmm.

You're right, Morrisey hasn't aged too well not quite a handsome devil but perhaps at times still this charming man, looks and charm do not necessarily go hand in glove! Oh the chance for Morrisey references!

I can't help thinking that Neil Hannon would be a far better choice to pen the UK's Eurovision entry. He could probably come up with a song to match the timeless profundity of "My Lovely Horse".

Ah yes, one of the funniest episodes of Father Ted! I have found a clip of th My lovely Horse vid on you tube so I will be blogging it!