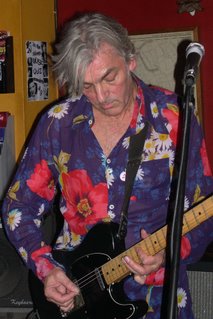 Less than a month after seeing Robyn play a Medecins sans Frontieres benefit at the Three Kings in Clerkenwell, I’m going to see him the Islington Academy tonight, He is promoting his latest album Ole Tarantula and he will be backed by the Venus 3 (which includes REM guitarist Peter Buck).

I’m looking forward to a great night. Fellow Robyn fan Tulloch (who I got to meet in the flesh at Clerkenwell) posted a gushing review of Robyn’s recent Oxford gig on Vegetable Friends , a group devoted to all things Hitchcock and Barrett. If it is half as good tonight I am in for a major treat.

…. I've just got back from one of those gigs of a lifetime. Not only did Robyn and the V3 play one of the best sets I've ever seen in 20 years of Hitchcock gigs but the encore was Robyn and REM… and the little old Zodiac rocked like it probably never has before!

I don’t expect the other members of REM to be at London - that does not worry me as they have largely sucked since becoming Shiny Happy People but I hope the main set looks great.

I’m Not sure I will take a camera with me tonight. If I do be assured photos will be blogged!


Robyn Hitchcock
Posted by jams o donnell at 10:52 am