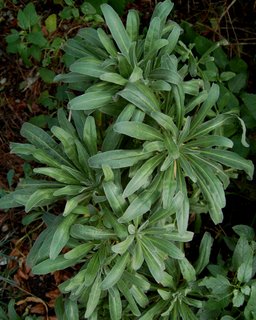 With one blog post I am quadrupling the number of photographs of this plant on the internet. Matthiola Arborescens is a member of the Cruciferae (or more properly the Brassicaceae) family and is thus related to cabbages and cauliflowers. Its closer relatives include the Night scented stock. Also known as the Tree Stock, it is a hardy perennial that produces a beautifully scented white flowers in spring (this is var. alba, the species plant has purple flowers). Chiltern Seeds describes the flowers as being borne on a spike but from our recollection this does not seem to be the case. 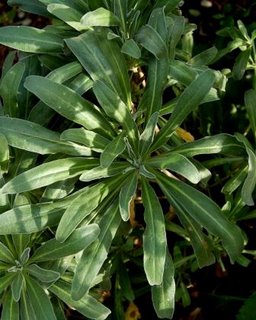 We did not intend to purchase the plant, It came in a pack of mystery seeds accompanying an order from Chiltern Seeds (They have an astonishing range and the not-wife, who is the one with the green fingers - or thumbs if you are american - swears by them!). It was very easy to germinate and has produced plenty of seeds for future germination. 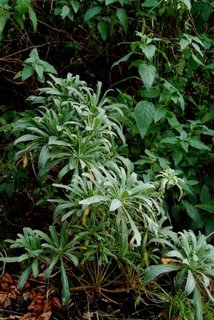 Despite being an attractive, gloriously scented and easy to grow plant it rarely appears in herbaceous borders. An internet search reveals only four british nurseries (and precious few overseas) that sell it. Inevitably I will post more pictures in a few months time when it is in bloom. 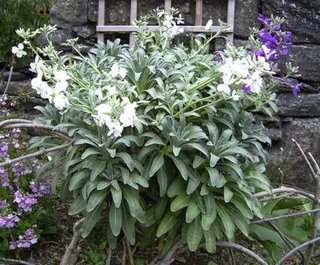 This is the only other picture of the Tree stock available on the internet . It appears on the Peppermint Farm website, a nursery based in Bantry in County Cork.

I know this post looks rather like an advertisment. I assure you we get no commission on sales, honest!

It's quite lovely! The cauliflower family you say? I wonder if they taste equally delicious in a creamy cheese sauce?

Hmm I will send you some and let you decide, ewbl!!

This is also known as Matthiola incana Alba .. which is why you may have only found a few stockists listing it under the arborescens moniker.

It's quite short lived but easy to propagate by both cutting and seed.

This is also often referred to as Matthiola incana Alba. Which might explain why so few nurseries list it.
It's quite a short lived perennial but easily propagated by both cutting and seed.