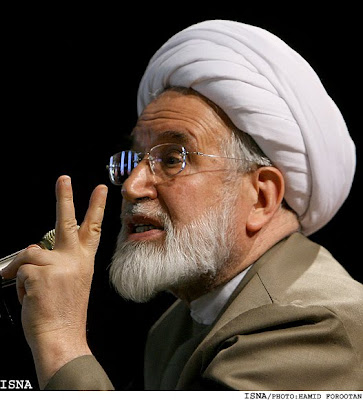 I know it hardly comes as a big surprise to read that the Iranian regime's hired thugs are using violence to destroy dissent but they are at it again. This time the target is Mehdi Karroubi

AP reports that Pro-government militiamen attacked Karroubi's home with homemade bombs and beat one of his bodyguards unconscious.

The government uses the occasion as an anti-Israel outpouring and to show its support for the Palestinians. But last year, Karroubi and other opposition leaders marked the day by gathering tens of thousands of their own supporters into the streets, and violent clashes broke out with security forces.

Crowds of hard-line protesters have gathered at the gate of Karroubi's home for several days, apparently because they believed he would try to attend the rally again this year, though none of the opposition leaders has called for demonstrations.

Mousavi condemned the attack on Karroubi's home, saying it proved the government's "enmity against Israel is an excuse" for attacking opposition figures. "Karroubi and figures like him and other freedom-seekers are the real enemies of authoritarians."

On Thursday, Tehran police chief Gen. Hossein Sajedinia told the semi-official Fars news agency that police forces would be deployed in several parts of Tehran to maintain security during the rallies. There were no reports Friday of any opposition gatherings.

Maintain security? For that read shoot and beat the shit out of anyone who doesn't support the mullahs and their revolting regime. I still have hope that the regime is thrown into the gutter

Once I read that Hungarian is the language with the most swear-words. Unfortunately, I do not speak Hungarian.

I wish I spoke Hungarian too. English just doesn't have enough expletives!

Did you ever read Persepolis by Marjane Satrapi? It's a pretty great book about a young woman who grew up in Iran - well done film version too.

I will have to ask my friend Redwine about the expletives

Persepolis was brilliant. My friend Elahe said of it That was my life. Se is of a similar age to Satrapi ans remembers the revolution and the Iran Iraq war in the same way

I keep going back in my mind to the first glorious days of Islamic revolution. How easily public opinion is swayed and channeled...

As for expletives - look no further than Russian. As every sailor worth his salt will tell you.

Ah yes, I suppose I could have called them yobs!