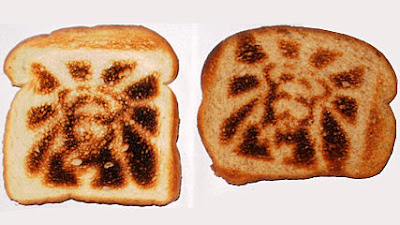 A Vermont man has solved a major problem that besets all too many people in this topsy-turvy world. Try as we may we can never find a crap simulacrum when we need one. But fear not, Galen Dively III of Walden, Virginia, has introduced a toaster that sears the image of Christ on each and every slice it toasts.

Retailing for $39.95, the toaster uses patented radiated heat technology to toast the face of Christ on any variety of daily bread. Dively has ordered an initial run of 3,000 units from a factory in China and believes the toasters will be a big hit with church and school groups. His company, Burnt Impressions, also has plans to create Virgin Mary and Star of David toasters.

Dively believes that he is serving a higher purpose. "I consider it cheap PR for the Lord," he said.

Cheap PR or not it does mean that a saddo like me gets another simulacrum rel;ated post for what laughingly passes as a blog
Posted by jams o donnell at 6:55 pm

Email ThisBlogThis!Share to TwitterShare to FacebookShare to Pinterest
Labels: Christ on toast, simulacra

Ha ha. The poor man has clearly been sold a duff product. I am sure I don't need to tell you now whose face is really being burnt onto that toast? Hilarious stuff.

Isn't smearing jam and butter all over the face of Christ a bit sacrilegious (or sacri-delicious)?

Ah we know who the true Messiah is Andrew!

someone else has already beaten him to it. I've been giving the virgin mary toast cutter to people as christmas presents for several years.

That's brilliant Nursie. I want one!

Do you know the Ship of Fools website, jams? It's Christian but has a Gadgets for God page. Some good ones there ...

Ah Liz I had forgot about Ship of Fools

I would be happy to hold Mr Dively while someone presses the heater part of that toaster to his backside.

Would you rather wait a little while. He has a Star of David toaster coming too!