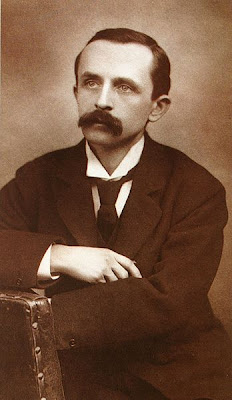 NOT Guilty!
Yesterday’s Telegraph carried a news item that at allowed those of us who loved the tales of Peter Pan to breathe a huge sigh of relief! The LAPD has cleared Peter Pan creator J M Barrie of any link to the mysterious deaths of two babies in the 1930s. Police had discovered their mummified remains in a locked trunk belonging to a JM Barrie.

The bodies were discovered last month when two women were clearing out the abandoned basement of an apartment building.
The corpses were wrapped in sheets and hidden in two doctor's bags among crumpled copies of 1930s newspapers and other belongings from that decade.

The only clue to the babies' identity was the name J M Barrie on the steamer trunk's lid. Investigators announced last week that, after reading correspondence from relatives left in the trunk, they had identified the trunk's owner as Janet M Barrie, a Scottish-born nurse who had worked in Los Angeles after her family emigrated to Canada (and not Kirriemuir’s most famous son James M Barrie… or second most famous son if you rate AC/DC over Peter Pan.. Bon Scott having been from said town too!)

Coroners have been unable to determine how the babies died but said there was no signs of trauma or that they were aborted. One had apparently reached full term while the other was much smaller and could have been a foetus or born prematurely.

Among the theories being examined by police is that Miss Barrie had children but that they did not survive or were aborted. Another possibility, said officers, is that they were babies she helped deliver in the apartment building who later died.

Whatever the reason it is heartening to know that the more famous J M Barrie was not involved. This is not the first time that such a misunderstanding has taken place. Last year partly consumed human remains were found in a Galloway cave which bore the graffiti “S..n Bean woz ere”. It was only after extensive interviews and forensic analysis that police concluded that the Bean in question was Sawney and not Sean!
Posted by jams o donnell at 1:25 pm

I'm sure we can fit you up for something Sean!

Well be careful Sean, there was a funny dressed musician in Germany a while back who went off with a load of kids... they never found him!