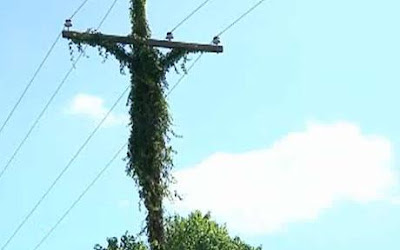 And the simulacra keep on coming! This one was found on a telephone pole in rural Louisiana.

According to the Telegraph The resemblance was reported by drivers on Highway 26 in rural Jeff Davis parish.

It didn't last long, however. After it came to light officials acted quickly, in case someone tried to climb it to be closer to Jesus.

Mike Heinen, a local electrical manager, said: “We were getting to that one but since it had such notoriety we went and cleared it up today. For public safety concerns we don’t want anybody trying to climb the pole or trying to touch the vines.” He said a church might be a better place to go looking for Jesus.!

That has to be one of the better ones.

So glad none reborn bicycle claimed the ivy-leaves were metamorphosed Korans allegorizing the crucification of Mohammed. ...

Tis a good one Cherie!

Ah Sean the part bicycled have a bit more sense I hope! I like the word verification!

Amazing - Billy Connolly spreadeagled up a telegraph pole. Whatever next?

isn't that what everyone is doing now days????

He said a church might be a better place to go looking for Jesus!

Or perhaps in Heaven.

If they climbed that pole they would be seeing Jesus a whole lot quicker than church. The glass insulators indicate bare wires and voltages greater than 4kv, which is why they went after the kudzu. Really high humidity or rain and anyone near the vines could be in for a nasty surprise.

Better it should be Gallowgate than Galilee Andrew!

Ach there's something that revolts me Nevin! The idea of burning books, also effigies is revolting to m

As Bryan says, James, Heaven may be where a searcher is heading!

I got the feeling that there would be something like that in store for someone who wanted to commune with jesus Bryan!

Bizarre! So easily the whole plant could be a live wire! Somehow reminds me of an effigy!

Elvis in all his glory!

Ah the spark of faith Gemma!

Haha So that's were he's been Snoopy

Oh I do love these! Keep finding them, jams!

Oh I will Liz!

I came to leave a link on your photohunt of the day... but I Love This!
I laughed out loud!
Only in the south~~

It made me laugh too! Glad you like it Sandi!

'officials acted quickly, in case someone tried to climb it to be closer to Jesus'

That's why we call ourselves Homo sapiens sapiens.

Despite so much evidence to the contrary Stan!