Photo hunt - got the subject wrong! 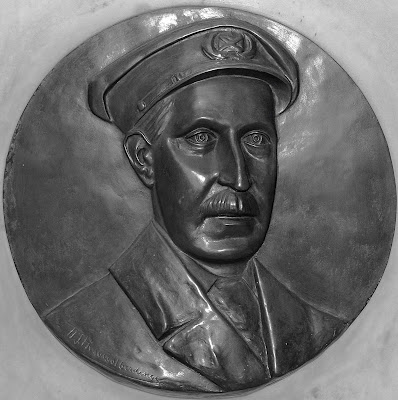 The theme for the week's Photo Hunt is Anniversary, it being the ninth anniversary of the appalling acts of terrorism that took place on 9/11 2001.

To be honest I had it in my min that the theme was memorial and not anniversary. I don't have a decent anniversary photo of any kind so I'll just have to go with a memorial instead.

My eye was drawn sometime ago to the war memorial at Liverpool Street Station to commemorate the many lives of young railwaymen who died during WWI. At the bottom is a plaque to a Captain Fryatt. For a long while I meant to find out who he was.

It was only a couple of months ago that I finally remembered to look him up. Charles Fryatt was a merchant navy captain during WWI, commanding railway packets between England and Holland. In March 1915, while in command of the SS Brussels he ran down the Submarine U33 which had surfaced with the intention of sinking the Brussels. The U Boat crash dived and escaped.

The following year the SS Brussels was captured by German destroyers. Fryatt was arrested and tried for attacking the U-33 the previous year. He was found guilty of being a "franc tireur" (effectively an unlawful combatant) and sentenced to death. He was executed by firing squad.

His murder caused international outrage at the time.
Posted by jams o donnell at 7:42 pm

I love your Photo Hunt, and I've gotten it wrong before also! LOL Happy Saturday.

I think this was a great post for phothunters. Memorials and anniversaries go together in my mind anyway. Happy weekend.

Great pic, and thank you for that lesson in history Jams. It is something we like to do here too. When we see historic plaques and memorials often I'll take a photo and try to learn more about who the person or place might have been. Sometimes it leads to interesting or intriguing bit of info that I otherwise might never have known.

Thanks. I;m glad you liked it although I got it wrong!

All the same to me - anniversary, memorial.

this is a great post. anniversary, memorial - same difference.

i didn't associate the theme to correlate with the date. actually i had no clue that it was already sept 11. oh well.

Thanks, Perhaps memorial and anniversary can b interchangeable!

Mr MacDonnell [you're owner of a Mac,hm], once the theme of this very hunt I am not participating will be sun you will not just present the moon but a bicycle.

And never you will fail to be right; 'cause, after all, aren't all of them part of Omnium?

Thus, kudos! And may neither the third, nor the fourth policmean ever catch you.

Elegant exegesis, Jams; by all means.

I agree with Carver, memorials and anniversaries go hand in hand :) What an interesting snippet about the WW1.

It is a great photo and I think it fits the theme perfectly. I struggled with the theme because I didn't want to go along with the 9/11 obvious thought for the theme.

You *could* have a memorial to commemorate an anniversary, so you're off the hook :)

No matter about getting the theme wrong, jams. That's a very affecting real-life story. Thanks for sharing it.

My first thought when I saw it was "How long before metal thieves get that?"

What a very human face he has. Or should that be humane? He looks like a husband and father.

Ah dear sgt you have the measure of me!

Thanks Sean, glad you found this interesting

Liz, he was an ordinary man who ran afoul of an enemy

Steve, mercifully it is in a prominent place and closed at night


I am glad you all found this take on the theme interesting. Thanks everyone!

Still a great take on the theme! :)

Thanks to you, I have learn much history from reading your posts these couple of years.

my anniversary is here

An interesting, sad tale...and a good take on this week's theme.

Very nice photo of that interesting memorial. Thanks for sharing the story too. I agree with Carver, memorials and anniversaries go together just fine. Happy weekend!

You are not alone in getting it wrong. I've done it before and it seems as though we are not the only ones looking at the comments. :) I agree with TorAa that they go hand in hand.

I'm up and would love to have company. The Misplaced Midwesterner

Memorials and anniversaries sound about the same. Take care with your extremity.

I don't think you've got it wrong at all Jams. A very interesting post.
I decided not to post this week.