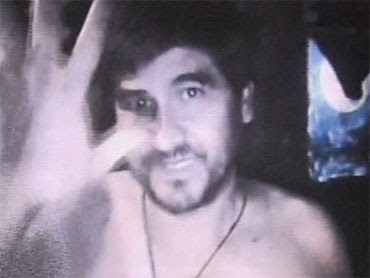 Trapped underground for a month a group of Chilean miners may have found a way to survive while waiting for a rescue that may be months away. The miners trapped underground I the San Jose mine in the Atacama Desert have each taken on specific naming a "priest", a "doctor", a "poet" a "TV presenter" and a "foreman" within the group.

"They are completely organised," said Dr Jaime Mañalich, Chile's health minister. "They have a full hierarchy. It is a matter of life and death for them… The worst scenario would be one of the men suffered severe psychosis for being trapped so long and attempted to claw their way out of the mine. As long as they are kept busy with defining roles we hope to avoid it."

The oldest member of the group Mario Gomez, 62, has taken on the role of spiritual leader and urges the men to pray daily in the makeshift chapel he has created in a corner of the subterranean chamber.
His job has been aided by 33 mini bibles and rosary beads for each of the men sent from the Vatican this week with a blessing from Pope Benedict XVI and lowered into the mine with the daily supplies of food and medicine.

Another of the miners, Yonny Barrios Rojas, 50, is using knowledge gained on a nursing course he attended in the mid-1990s to administer medicines to the group including vaccinations against tetanus, pneumonia and flu and performing daily health checks.

Victor Zamora has penned a poem describing the first 17 days they were trapped down the mine without contact with the outside world. "It's a moving piece of work especially from someone who until now had no inclination to write," explained Alberto Iturra, a psychologist at the site. "Each is finding their own role and their own way to express themselves and we think that is very healthy," he said.


While engineers above ground continue the rescue operation to bore a 2,297 feet escape shaft to raise the men, the miners themselves have been told they will play a critical role in rescue. The miners must prepare themselves to ensure they are fit to work as the drill gets closer. They men will need to move an estimated 4,000 tons of rock and earth that will fall into their chamber as the rescue shaft is cleared.

Luis Urzua, the 54-year-old leader of the shift, has mapped out the chamber in preparation for the mammoth job required in the final stages of the rescue, which could take as long as three to four months. He will also organise the men and oversee the work when the time comes.

I hope for the sake of these men that their society holds together. I cannot imagine what it must be like to be where they are. I do not know if I would have their strength of endurance. Here’s hoping that their rescue is as quick as possible
Posted by jams o donnell at 7:04 pm

I've been dumbstruck by the courage and conviction of these people. Most days, they are in my thoughts. I'll be sharing this post on fb. Thanks, Jams.sa

It's truly amazing. I really hope they make it

It's mind boggling isn't it?

They will survive.
The media are hoping to see conflict and mental breakdown because that suits their 'soap opera' mindset and will help to sell more newspapers.
But these are miners; they are not just physically tough but also mentally tough. There will be no conflict between them and they will co-operate in all things. In their daily working life they are reliant on each other and they trust each other: they have to because their safety and their lives depend on it.
My grandfather was a coalminer. I know what sort of men these are, trapped in that mine. My only worry for them is that there might be an earthquake. I hope and pray that will not be the case.

As for the mine owners...... I do not have enough profanities to describe them fully!

Thanks for the post, Jams. I worked, as a nurse, in a Northern Ontario (Canada) gold mine village. We had a few emergencies. As JD says, miners are tough, in body and spirit, and also united. Something happens to one, it happens to all. I seldom saw a group of people so caring, helpful and devoted to one another. The families were enterwoven.

The same here. Those miners are not alone down in that trap. The elders, wives and children are all down with them. They sustain one another and share the ordeal together. All around the world, we're praying with them.

It truly is Nursie

JD I hope that you are right. I am sure that they are physically tough but the mental thoughness required to get through this maybe beyond some. But I do not wish that to happen, unlike some elements of the press, I truly hope that they make it through okay

I can imagine how close knot such a community is Claude. I hope that this sense of community brings them through safely