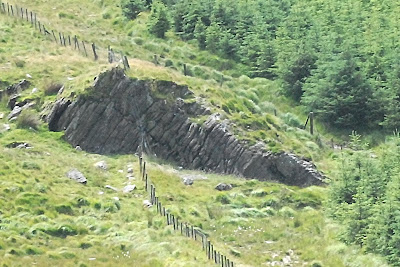 The theme for the week's Photo Hunt is school so what am I doing showing a photo of a big rock in a field?


Actually I am not stretching the theme one little bit. The rock, which is located in the Millstreet County Park in Ireland, was the site of a hedge school.

A hedge school was a rural school in Ireland that existed mainly in the 18th century when catholic schools were forbidden under what were known as the Penal Laws, which placed severe restrictions on the rights of Catholics and "dissenters" (protestants who were not part of the Anglican church).

In the absence of a formal education system the hedge schools continued well into the 19th century. They did decline after the introduction of National Schools (primary/elementary schools) in 1831.

In reality most hedge schools were located in barns or in other places out of the elements. This one is relatively unusual

Wow. I can't imagine anyone coming up with a more unusual school than this. It's a cool looking rock!

Haha did you expect a conventional school from me!

I think you get the prize this week Jams.

Happy weekend to you.

pretty cool - i thought this was where you often went when you skipped SCHOOL :D

Wow. Interesting take on the theme this week, Jams!

what a great photograph and a very interesting post for SCHOOL! Happy weekend.

So did they sit on the rock?

Love your take on the theme and thank you for the history lesson. I can only imagine what it must have been like being a Catholic child and going to a hedge school in those turbulent times.

I hadn't heard of a hedge school before, I learned something new today. A brilliant idea for the theme :-)

Very interesting history and a fantastic shot. What a great job you did with the theme. Happy weekend.

Why would I not be surprised?

What an amazing location for a school! And thanks for the interesting accompanying info, Jams. :)

How interesting. Not so pleasant in the winter.

Very interesting! I had never heard of hedge schools!

very unusual yet interesting. thanks for the history lesson. :)

Very interesting. I'd never heard of this before. Thanks for sharing!

Jams I am not sure . Perhaps they did

that is so interesting!

Really fascinating! I have never heard of this before! And the rock itself is intriguing too!

It would eb a challenge to concentrate on one's studies in such a beautiful spot!

What a beautiful place and an informative post. I also went with a less than conventional take on the theme.

quite fascinating. the students in hedge schools must have real passion for learning.:p

Great shot. It's an interesting story, thank you for sharing it with us.

I thought that rock was familiar. Great take on the theme.

Might have been good in the summer, but just think of the winter!

Hi, my Irish blog friend, your post is not at all stretching the theme.
Far away from. My wife is a Teacher, and very often she needs to bring her students out in the real world to really study and understand...
To combine theory with real world

That was interesting,.. I didn't know that. Great pic!