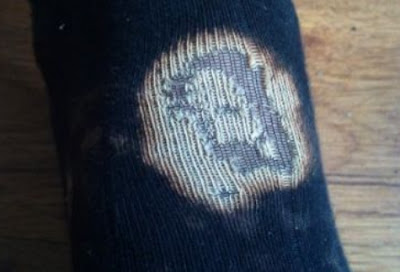 James Henderson of Oswestry, had a major shock when he discovered the image of David Bedford (or perhaps Steve Prefontaine) on one of his socks

“It was a massive shock to me,” he said. James said he and his friends decided to travel around Europe as part of a 10-day holiday. He said he had spilt bleach on one of the socks while at work and somehow ended up taking them on holiday.

But the image of David (or perhaps Steve) Jesus did not appear until the end of his travels.

David Bedford
“It was on the last day of my holiday and I took my shoe off and there it was,!” he said “My friends were sitting next to me and I called them over and their reaction was the same. It was a big shock to them. I am not especially into 70’s athletics but it was a shock.I have heard it all the time that people are finding images of athletes in weird and wonderful places but it was a surprise that I found one.”

or perhaps Steve Prefontaine
James has kept the sock and is still deciding what to do with it.

Appearances of athletes is becoming more and more common. Last year the image of former Olympic 800m champion Steve Ovett appeared on a cow’s udder in Rutland while just last week Long distance legend Lasse Viren was found on a pork pie purchased at a Lidl in Batley.
Posted by jams o donnell at 7:58 pm

I think this is what you need-

it was only a matter of time before somebody did it
:)