The cat’s lap – a thing of elegance (naturally!) 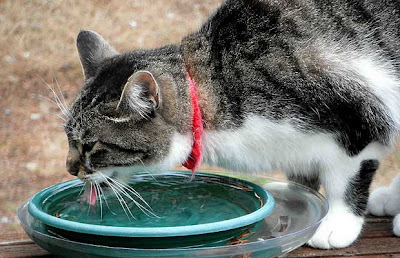 My thanks go to Claude who sent me a link to this article in the full knowledge that it would be of interest to me.

According to the Physorg website researchers at MIT, Virginia Tech and Princeton University have analyzed the way domestic and big cats lap and found that felines of all sizes take advantage of a perfect balance between two physical forces.

It was known that when they lap, cats extend their tongues straight down toward the bowl with the tip of the tongue curled backwards like a capital "J" to form a ladle, so that the top surface of the tongue actually touches the liquid first. This is known because of the work of Doc Edgerton, who used strobe lights in photography to stop action, filmed a domestic cat lapping milk in 1940.

Recent high-speed videos made by the team revealed that the top surface of the cat's tongue is the only surface to touch the liquid. Cats, unlike dogs, aren't dipping their tongues into the liquid like ladles after all. Instead, the cat's lapping mechanism is far more subtle and elegant (of course!!). The smooth tip of the tongue barely brushes the surface of the liquid before the cat rapidly draws its tongue back up. As it does so, a column of milk forms between the moving tongue and the liquid's surface. The cat then closes its mouth, pinching off the top of the column for a nice drink, while keeping its chin dry.

The liquid columnis created by a delicate balance between gravity, and inertia. The cat instinctively knows just how quickly to lap in order to balance these two forces, and just when to close its mouth

The domestic cat averages about four laps per second, with each lap bringing in about 0.1 milliliters of liquid, the big cats, such as tigers, know to slow down. They naturally lap more slowly to maintain the balance of gravity and inertia.

The work began three-and-a-half years ago when Stocker, who studies the fluid mechanics of the movements of ocean microbes, was watching his cat lap milk. That cat, eight-year-old Cutta Cutta, stars in the researchers' best videos and still pictures. And like all movie stars (Cutta Cutta means "stars stars" in an Australian aboriginal language), he likes being waited on. With their cameras trained on Cutta Cutta's bowl, Stocker and Reis said they spent hours at the Stocker home waiting on Cutta Cutta … to drink, that is. But the wait didn't dampen their enthusiasm for the project, which very appropriately originated from a sense of curiosity.

"Science allows us to look at natural processes with a different eye and to understand how things work, even if that's figuring out how my cat laps his breakfast," Stocker said. "It's a job, but also a passion, and this project for me was a high point in teamwork and creativity. We did it without any funding, without any graduate students, without much of the usual apparatus that science is done with nowadays."

"Our process in this work was typical, archetypal really, of any new scientific study of a natural phenomenon. You begin with an observation and a broad question, 'How does the cat drink?' and then try to answer it through careful experimentation and mathematical modeling," said Reis, a physicist who works on the mechanics of soft solids. "To us, this study provides further confirmation of how exciting it is to explore the scientific unknown, especially when this unknown is something that's part of our everyday experiences."

It comes as no surprise to this cat lover that mogs have an elegant solution to the problem of drinking. Dogs on the other hand take a hit and hope attitude to the problem.,, It’s a bit like the difference between drinking tea from a china cup (with little finger extended) and quaffing a mug of beer (and largely missing!).

Ach it probably won't be long until the Genus Felidae (and perhaps genus Pantera) develop the opposable thumb from their dew claws.... Then we are truly doomed!
Posted by jams o donnell at 10:19 am

Email ThisBlogThis!Share to TwitterShare to FacebookShare to Pinterest
Labels: cats

Surely no one expects a feline to behave stupidly as a dog...

As for the whole research, methinks an Ignoble prize is on the way...

Oooh, thanks for this post, jams. I heard something on the radio about this yesterday. Cat's are amazing. As they say:

Absolutely.. and we are willing serfs to boot!

I just hope, Jams, as I intend to return as a cat, in my next life, that this refined way of drinking will come naturally. Ever since I watched the video, I've been practicing lapping cat-ways. Sadly, it's no go. I'm just a messy, greedy, slurper human being!

Ah Claude all will improve when you are a cat!

I like cats very, very much, so don't get me wrong! :-) BUT. I hate the cat hair all over everything. So every time I crave a feline, I waste no time in dismissing it. A shake of the head and I am back to normal in no time!

I have truly loved four cats in my lifetime: Peter, Snowy, Timmy and Rita. R.I.P. kitties. So you see, that proves I am very fond of cats.

About the article, I saw something on it on TV. The footage of those lapping tongues was a-maaaaaaazing! :-D

I'm in a confessional mood today, it seems!

Ah we don't worry about cat hair everywhere. We reduce the problem by leaving throws on the sofas.

We love our cats. A house is not a home without them!

The real truth is that we have allergies in the family or else I know I would've succumbed to my kitty craving by now! :-) There is something particularly homey about having a cat, yes. :-)

That;s a shame Gina. but in the circs better not to have a cat in the house.