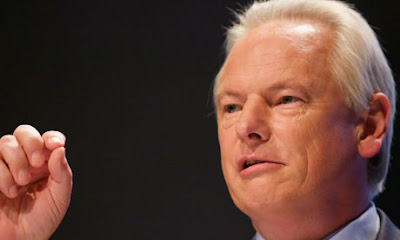 The Telegraph carried a report on a major new initiative to cut waste. Cabinet Office minister, Francis Maude, has said that any officials who took over the functions of axed Non Departmental Public Bodies should use up their old letterhead and notepaper to save money.


Mr Maude said he wanted civil servants to “cross out the old name” and write the name of the department instead. He said: “It is a very good idea. It should be an absolute iron rule.”

Mr Maude told the MPs he wanted officials to follow an example set by Margaret Thatcher when she split up the Department of Health Social Security into two departments in 1988.

Mr Maude: “The then-Prime Minister said to Ken Clarke, its new Health secretary: ‘I don’t want you to have any new stationery until the old stuff has been used up…For months afterwards, letters went out with ‘Department of Social Security’ carefully crossed out by Department of Health staff. I would expect the same approach to be taken today.”

Most headers would be stored on a pc and printed directly these days so I can imagine this iron rule will save far less than the value of his sound bite.

Then again if this is the best that Maude has to offer in the first six months of office then I shudder to think what he will be saying when he runs out of ideas!
Posted by jams o donnell at 12:02 am

Look at Maude's face carefully. He'll get in trouble for this because that it is clearly a latex mask is just too obvious. The eyes are too deep in from the fake eyelid slits, the surface has not had its humanish fake blemishing powder applied and the nylon hair has not even been slightly ruffled, for authenticity, in the manner that he would have been tutored in. I think he's pulled it on over his green scaly bits in a bit of rush there.

Oh and the mouth! He's got that all wrong in the rush too, hasn't he?

Ah you have him bang to rights. With suggestions like that it is clear that he is not from the same planet as us

Well, technically it's not that he's not from the same planet as you, but that you are not from the same planet as him. His lot put your lot here, for a specific purpose that would trouble you too much were I to reveal it. Then they invented all that evolution stuff and planted the fossils to fool you, and for the folk that were too unsophisticated buy that crafty ruse they offered up a choice of a few crazy religions just to play with how gullible you are, then... since it's all just a game for them as they try to occupy their immortal years, they plan to... but no, I'll stop there, because nobody will believe me and you'll all just think I'm the mad deluded one. As if... Goodnight (and keep a close eye on Jupiter).

AH now this explains a lot. The new Ministers seemed to be acting like gods...

Given the some of their quality ideas I would have thought Uranus was a more likely home... (the planet and not your botty of course!)

Thanks for clarifying your thoughts there Jams. I've been told that I often act as if I think the sun shines out of my Uranus. I just humbly try to shed a little light wherever and however I can, that's all. And once again, goodnight. I have a busy day planned for tomorrow. Unproductive, perhaps, but busy.

"what he will be saying when he runs out of ideas! "

Oh, that's simple: no more toilet paper in the restrooms. Use only stationery with correct letterheads.