Death of a sycophant

While I keep an eye on my stats I don't follow them slavishly (apart from keeping on the lookout when they are bout to hit a milestone like the 500,000th visitor) I was surprised to see a big spike in visitors over Friday and Saturday with the great majority of them coming from Romania.

The reason for this spike was the death on November 5th of Romanian poet Adrian Paunescu who, although he described himself as an "inner circle dissident", he was the court poet to Nicolae Ceausescu/ Here is a post I wrote last year which includes on of his abysmal poems glorifiying the Nazi bastard. 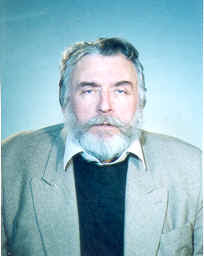 Adrian Paunescu now
While I love bad poetry, there is a huge difference between the passionate ineptitude of the likes of Tayside Tragedian or McIntyre of the giant cheese and the sycophantic ramblings of the political court poets as you will still see in places like North Korea.

Of all the former communist states in Europe Romania was in many ways one of the worst. Ceausescu may have garnered a little respect in the west by having the temerity not to participate fully in the Warsaw Pact structure and not contributing to the forces that toppled Dubcek in Czechoslovakia he was an evil mane in virtually every other respect of his worthless life.

Ceausescu was basically a NAZI. Like other tyrants he had his coterie of sycophants. One of these was Adrian Paunescu who was Ceausescu's court poet. Here is an example of his work, some extracts of a poem translated by Constantin Roman:

"We now live a new life, which was dreamt of and fought for
By our forbears, our national revolutionaries Tudor, Balcescu
Horia and Iancu, who were once upon a time
The martyrs of our sufferings and of Romania’s fate

Today their heir is this wise old man, brought to us in Spring time
To be a hero amongst heroes. As Communist Party Leader,
It stands to reason that he is also the country’s President.
And that is why, through the very person of Ceausescu we found our own newborn ethos.

It is Ceausescu himself that introduced honour within the Communist Party and the Country
He rediscovered our history unadulterated
To make us reach for the future in our dreams, as well as
In our daily deeds, full of new meanings.

We can’t accept that our life should be broken
As we make history day in, day out, the way it was prescribed
By the 9th Congress of the Communist Party
Whose philosophy is to believe in the People as the ultimate solution


...
Notwithstanding all that the centre of our struggle remains
The Communist Party who knows the problem and has the solution
The Party is the architect of all our future
The perfect judge of our past and present 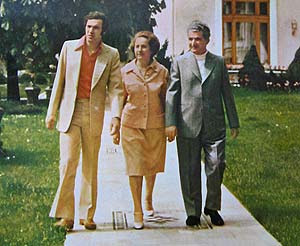 Even if this is well written in Romanian it has the stink of a man who had his lips to the sphincter of a tyrant. I gather that Paunescu had the temerity to call himself a dissident.
If you wish to read about a real Romanian dissident who did suffer terribly for her actions try Doina Cornea and not this worthless scumbag
Posted by jams o donnell at 7:53 pm

I am fascinated that this post was inspired by looking at your stats.

Yet another scumbag I didn't know about! :-D

I find the photograph with Margaret Thatcher to sort of funny. I dug the dudes' polyester pants!

It is the sort of poetry which I hope we never see again (DPRK I hope sees the end of this sort of thing soon too). Basically he sucked up to a Nazi shithead in Ceausescu

Good riddance and I'd never even heard of him until now. You do a good service with these posts.

He was a dissident: licking the sphincter against the clock!

Now, it is easy to cast aspersions. Here was a man who was brave enough to refuse and extra glass of wine at Ceausescu's dinner table or that the sky was a different shade of green than the great leader claimed....

And he is brave enough to wear mustard-yellow polyester after Labour Day.

Now you mention it Anneke he was truly a great dissident!

Especially with regard to his colour choice!