Langer : the finest word in the Corkonian lexicon

While I was bor in sunny Romford both of my parents are from Cork. My father is from the City, my mother is from a village not far from the Kerry border. My father in particular is a Corkonian first and an Irishman a distant second. Despite having left Cork nearly 70 years ago it does not take him long to revert to the glorious sing-song accent that is peculiar to the city.

Cork has its own slang. Perhaps the jewel in the crown is the word langer. It has several meanings:

Unfortunately it is also a not uncommon surname which may have originated as a nickname for a tall person (it might also have bee used to describe someone from a langa – a cultivated area).

Whatever the origin, it is a name that will give a smile to any Corkonian! 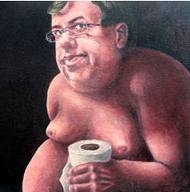 BIFFO - a fecking huge langer
According to an article in the wonderful website the People’s Republic of Cork. The word is about to enter the Collins English dictionary. Unfortunately it will be described, much to the chagrin of the writer, as Irish rather than Cork slang!


Interestingly the author, Finbarr Barry (Now that is a very Cork name!) states that the actual origin of the expression dates back to the 19th Century when the Munster Fusiliers (the regiment my grandfather served in briefly in WWI before he was take prisoner in August 1914) were posted to India

The soldiers were often plagued by the Langur Monkey in the jungles. The soldiers then used the word ‘langur’ to refer to people they despised when they returned. The wild untameable behaviour of the jungle monkeys was often compared to those monkeys emerging from the pubs of Cork at closing time and also received the name “langur”.

I did not know this. It is a wonderful explanation. I hope that it is true.

langers
The article goes on to describe how the word has gone from being a uniquely Cork expression to one that is gaining ground across the country. It is becoming less of a pejorative term and more of a term of robust endearment in the process.

It is well worth a read, a most interesting and enjoyable article from a much loved website
Posted by jams o donnell at 1:22 pm

Ah, Cork. I lived there myself for a year and my parents spent more than a quarter of a century there - but I'd left home by then. I like the Cork version of a well-known slogan:

Haha good one Francis. y own parents have not lived there since the 40s. I was lucky to spend my childhood holidays in Millstreet though

No knawvshawling intended, but to my ears 'His poor old connihaly is sore' sounds more affective than 'His poor old bernhard ... err ... langer is sore',
May I add that in such pitiful state of affair only gowls would gattle gauzers.

Ah a fine word but isn't a connihaly a boy's penis?.. I'll go for langer myself Sean!

They may be gowls but sometimes fortune favours the brave!

One side of my family is from Cork too.

A fine point of origin James!

Quite, Jams, but isn't there a child, i.e. boy to be found in any man's psyche?

Anyway, there seems to be giddum galore in us today.

That is true but there are some things not to be undertaken by a boy!


Definitely giddum.. no poor mouth for us today!

Re this Biffo character: you know, Jams, in some situations the title "huge langer" could be a compliment. Not what you intended, surely ;-)

@Snoopy Well, you could just simply call him a "big prick"!

Ah Snoopy only if I said he had big langer. At present the Taoiseach is an enormous langer in himself!