Not the Witchfinder General’s diary but still interesting 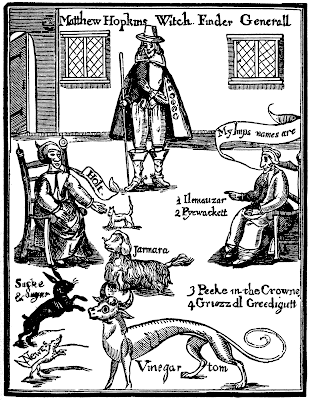 When a recent Telegraph article had the headline Journal of the Witchfinder General opened up I thought that there would be some fascinating information about the life and views of one of Essex’s not so favourite sons, Matthew Hopkins.

Actually not, the journal in question was written by Nehemiah Wallington , a puritan London woodturner who wrote about his life and times and contemporary eventst. Some of his writings have been published and are still available on Amazon

However, a team from The University of Manchester's John Rylands Library are currently photographing and ''digitising'' the diary which is kept at Tatton Hall in Knutsford, Cheshire.

The journal tells of how young maid Rebecca West confessed to having sex with the Devil and to how she implicated her mother and others in witchcraft - condemning them all to the gallows - but saving herself.

The activities of Hopkins and the Essex Witchfinders took place between 1645 and 1647. and 112 people were hanged for witchcraft - often when they were forced to confess whilst being tortured.
.
In March 1645, he was commissioned by the local magistrates to "question" a suspected witch, Elizabeth Clarke who was also physically examined for ''devil's marks' signs like warts, moles or bits of extra skin that were declared to be "teats" to give suckle to imps.

Under torture Clarke broke down and named several other women including Anne West and her daughter Rebecca. The women were detained and taken to the cells in Colchester Castle for questioning. Rebecca confessed and implicated her mother and others, thus saving herself from hanging.


In the journal Hopkins was referred to as the ''Gentle man'' and Wallington wrote of how Rebecca confessed after seeing flames disappear when she became separated from her mother.
In the passage he wrote: ''Shortly after when she was going to bed the Devil appeared unto her again in the shape of a handsome young man, saying that he came to marry her.

The handwritten notebook is the only copy known in existence. Mansion and Collections Manager Caroline Schofield from Tatton Park said: "Nehemiah Wallington was an intelligent working man who achieved much in the face of such difficulty and exhaustion in daily life.

She added: "The Wallington manuscript are of huge importance to scholars of the period. We hope to use the digitised images in a new interpretive exhibition in the mansion's library.''

In the end this is a bit of a shaggy Dog story with a misleading title. That said anything that makes such manuscripts more accessible is to be lauded
Posted by jams o donnell at 11:37 am

I found this fascinating!

Frightening stuff. Possibly hundreds of thousands of people were killed during the witch hunts and to a very large degree charges were brought about by those who wanted to claim property.

How did she save herself - slept with the judge and jury?

It is interesting eh Kay?

The hunts were about avarice and fear. Hopkins thrived during the period at the end of the First Civil War.

Nt sure how many witches dies.. probably in the tens of thousands. Doesn't make it right whatever the number

Selling her mother helped. But then most accused witches were acquitted.