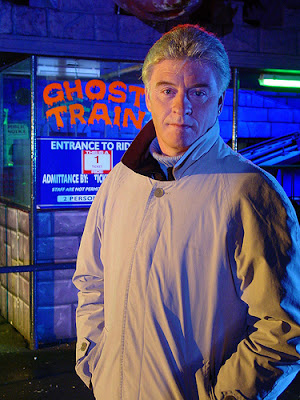 For those that do not know him, consider your selves lucky! Acorah is a soi-disant medium who used to host an atrocious programme on a cable tv called Most Haunted. Essentially he is a liar and a fraud who has been caught out more than once. Some years ago he channeled a A Kreed Krafer and a Rik Eedles, lines supplied to him which are anagrams of Derek Faker and Derek lies.


I thought we had seen the last of the charlatan but according to the Telegraph he has  ust hit the headlines  stating that the Madelaine McCann, a five year old girl who disappeared during a family holiday in Portugal in  five years ago, has passed over to the "spirit world" ”.

Acorah told the Sun in an interview that: “I know her parents are convinced Maddie is alive and I’m really sorry – but the little one has been over in the spirit world for some time.”  However, he tries to give a crumb of twisted comfort: “I don’t think it’ll be long before she reincarnates...


Unsurprisingly  the McCann family are sickened

“It’s incredibly distasteful and insensitive.”A spokesman for the couple added: “Kate and Gerry believe their daughter is alive and the Metropolitan Police are currently pursuing an investigation to that effect."

I have no idea if Maddie is alive or dead. I earnestly hope she is still alive and one day will be reunited with her family but it would not surprise me now if she were dead.

As for Derek Acorah though, he has once again shown himself as the twisted little charlatan he is. But then he claims to be a medium and all mediums are either liars, frauds or self deluded.
Better that he shuts the hell up and finds some work with some self respect and dignity.
Posted by jams o donnell at 1:41 pm

Unsurprisingly I am sickened too by the story. Derek, dreck - whatever.

The blokes an idiot I can't believe people watched that crap it was rigged I wrote an email some years ago to the show explaining that Karl the producer was in on it also, it was a joke of a show never watched it again. Obviously out the limelight dereks comeback "maddie is dead" then he then admits he's full of shit what a knob he needs stoning so he can be with his imaginary friend forever

Well he is a liar, a charlatan and a bullshitter

Most haunted,Acorah's terrible program that you mention,Is to me a comedy,I watch him in that and wet myself,Its hilarious,His acting is horrific.But on a serious note,This scumbag has made lots of dough from being a charlatan and we sadly live in a society where people are allowed to get away with this.

The geezer acorah is not just a fraud he has the most annoying voice that not even the dead would hang around to listen to.If I had a pound for every time he says "and I say it with respect"I would have a bank account as fat as his.I was going to rip into him but on his website the word verification is not letting me post . And if he is that good why does he need me to leave my name and email addy .Rant over.

couldnt give a monkeys said...

yep what a sad bastard,hes mocking the living and the dead,maybe its a split personality and he really does hear voices in his head,i like most haunted cause it gives me a great larf,derek possessed is better than any bloody comedy ,karl and the rest shittin themselves cause somebody farted or a light bulb blew.well bollocks to acorah and i hope he pays for his sins to the dead.

couldnt give a monkeys said...

best acorah bullshit to date was when he went to a nazi castle and started talking to the dead,when suddenly phil spencer piped up `wouldnt the spirits be talking in german',after takin a moment to think up a suitable lie 'the best the scouse twat could come out with was 'no,the spirits al talk in the same spirit language 'seriously !!