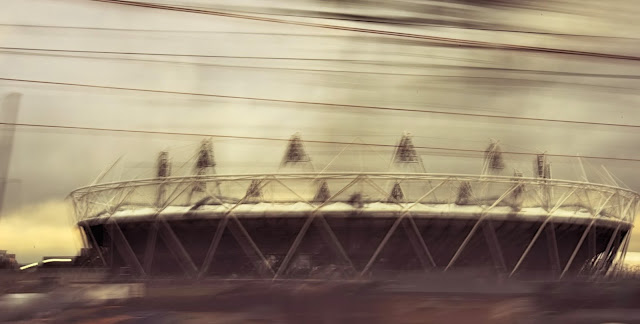 There are now just 59 days to go until the 2012 Olympics start. My daily rail commute into work took me past the main Olympic sites in Stratford so I got to see how construction progressed.

I must admit that the main stadium itself never looked that imposing, but that may be due to the fact that it is constructed in a bowl.

One thins for certain is that wild horses will not get me using the rail line from Romford into central London for the duration of the games. Add commutes to visitors and you have a recipe for very, very crowded trains. Although I do enjoy watching the Olympics on tv and have done religiously since 1972 (although I vaguely remember the 1968 games) I was not too bothered by the prospect of actually attending. I most definitely be watching from the comfort of my home, particuarly the athletics, cycling, rowing and the canoeing.

As for how the British team does, I hope they do as well or better than the last games. I most certainly hope they do not emulate the Canadian team at the Montreal Games and win no gold medals.

When the Olympics were held in Sydney in 2000, the city was surprisingly quiet as many locals left to escape the anticipated mayhem. Or to make money by renting out their homes and apartments to visiting tourists.

It was great having so much less traffic on the roads!

The Olympic park is by a main commuter line. I expect it to be heaving even if many people take holidays or work from home