Just when you think it could not get worse for the Catholic  church, another scandal may be about to break (or it may not...) 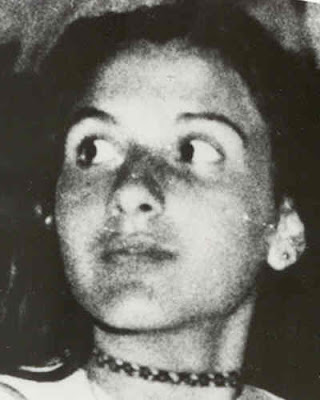 On 22 June 1983  Emanuela Orlandi (above), the daughter of a Vatican Bank official, disappeared while on her way to a music lesson. Her disapearance remains unsolved and has been the subject of more than a few conspiracy theories.

On 2 February 1990 a piece of human shit going by the name of Enrico De Pedis (below) was shot by Mafia colleagues. Rather than being dumped in unconsecrated ground he was interred in the Vatican owned Basilica of St Apollinaire in Rome. There are allegations that a Cardinal Ugo Poletti accepted a "gift" of over £400k (for renovations and other "good" works) to authorise his burial in this church. Whether this is true or not is another matter. 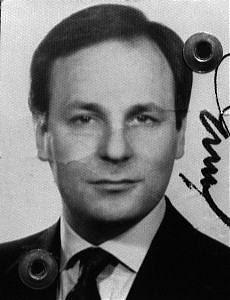 One of the persons who is alleged to have been involved in Orlandi's disappearance is De Pedis. For some time there have been moves to open his crypt in the Basilica of St Apollinaire to determine whether Miss Orlandi's body is also hidden inside.

Today forensic teams and marble workers opened the scumbag's tomb. His body was found, inside a three-layer sarcophagus, well preserved and wearing a dark blue suit and black tie. Police took fingerprints and confirmed his identity. But also, tucked inside a niche of the ancient crypt were dozens of boxes containing unidentified human bones.


The city's chief prosecutor, Giuseppe Pignatone, said the findings would be inspected as part of the ongoing investigation into Orlandi's disappearance.
"It is impossible that a young 15-year-old girl could disappear just like that, without a trace," said Orlandi's cousin, Pasquale Lo Russo, outside the basilica. "Now, finally, with Vatican and state officials allowing the opening of this tomb, we hope it will help us to verify the truth."


"It is an enormous and fascinating story that interweaves the church and the criminal underworld in the political context of the cold war years in Rome," said journalist and author Rita di Giovacchino, who has been following the case from its beginning and was present outside the basilica as the crypt was opened. "It is better than a Dan Brown novel."

The opening of the De Pedis crypt marks a long-awaited step forward for the Orlandi family, who now await news of further DNA testing by coroners and forensic anthropologists at Rome's University of Sapienza.

"This is just one more step forward for the investigation," Emanuela's brother, Pietro, said outside the basilica. "We hope eventually it will bring us clarity."

The bones found may or may not include those of Miss Orlandi but I am sure a large number of cold cases are about to be reopened! That De Pedis was buried in a church normally associated with Princes of the Church should be scandal enough....

...But, if the bones include the remains of Miss Orlandi then the Vatican is going to face a scandal that hopefully will rock it to its rotten core.
As readers will know, I was born and raised a catholic but the Vatican and I parted company in my teens. The more I have seen of the church's hierarchy  in action over the years, the more and more I hate everything it stands for.  The heiratchy continually spits in the face of the many good and fine priests, nuns lay members who do sterling service in often terrible conditions. It is these persons who make the church, not a bunch of elderly megalomaniacs sitting in a small part of Rome.

But who am I kidding, the hierarchy will cling like death to the trapping of power and will still go on. Perhaps these revolting old men may learn from all of the scandals that it has faced of late and will face in the years to come, but I doubt it.
Posted by jams o donnell at 8:46 pm

Much evil in the Vatican, that's for sure. Strange how so many things are the opposite of what they claim to be, not just different, but opposite.

What else is new?