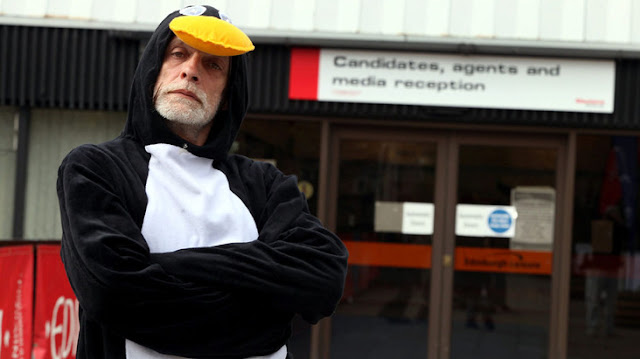 Thursday was not a good night for the Tories or the Lib Dems. I suppose it is some cold comfort to the Tories that none of their candidates were beaten by a man in a penguin suit

Professor Pongoo stood as an independent candidate in the Pentland Hills ward for the City of Edinburgh Council andcarried out his campaign dressed in a penguin costume. He even promised to go to every full council meeting in the costume

The voters of Pentland Hills rewarded him with 444 votes - more than the Liberal Democrat candidate Stuart Bridges received just 370. He also out polled the Greens.

A tad humiliating but then in quite a few areas a Tory candidate probably would have been beaten by a dog turd in anything but a blue rosette!

ps: and for good reasons.

Anger for its own sake doesn't produce good ideas.

It appears Livingstones obsessions were too hard wired for contrition.
Growth requires character that was obviously lacking

Penguins should (and shall) rule the Earth!

Of course it doesn't. Sadly the Mayoral election came down to a choice between shit and shite. I dislike Ken, always have but Boris is an embarrassment.

So is this another of the Elders' plans mon ami?