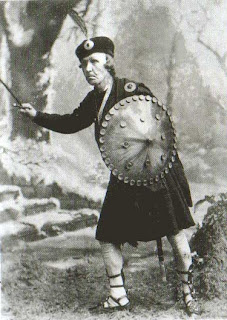 AFTER the battle of Calais, King Edward returns to fair England,
And he invited his nobles to a banquet most grand,
That the like hadn't been in England for many a day;
And many of the guests invited had come from far away.

The large hall of Windsor Castle was ablaze with light,
And there sat King Edward and his Queen, a most beautiful sight-
To see them seated upon two thrones of burnished gold;
And near the King sat Jack o' the Cudgel, like a warrior bold.

And when the banquet was prepared, King Edward arose,
And said, My honoured guests, I have called you together for a special purpose!
To celebrate our victories so gloriously achieved in France
By my noble and heroic troops at the charge of the lance.

And now, since the war in France with us is o'er,
And Edward, our son, about to marry the lady he does adore,
The most amiable and lovely Countess of Kent;
Therefore, I hope they will happy live together and never repent.

Then the Prince arose and took the fair Countess by the hand,
As King Edward, his father, had given the royal command;
Then he led the Countess Joan to the foot of the throne,
Then King Edward and his Queen welcomed the Countess to their palatial home.

Then the Prince unto his father said, I must not forget whatever betide,
That to Sir Jack o' the Cudgel I do owe my bride;
Because he rescued her from the hands of a fierce brigand,
Therefore 'twould be hard to find a braver knight in fair England.

Then a cheer arose, which made the lofty hall to ring,
As Jack advanced towards the throne, on the motion of the King;
Then Jack fell on one knee before King Edward,
Then said the Monarch, Arise, brave youth, and I will thee reward.

Sir Jack, I give thee land to the value of six hundred marks
In thine own native county of Kent, with beautiful parks,
Also beautiful meadows and lovely flowers and trees,
Where you can reside and enjoy yourself as you please.

And remember, when I need your service you will be at my command,
Then Jack o' the Cudgel bowed assent, and kissed King Edward's hand;
Then the Countess Joan took a string of rarest pearls from her hair,
And placed the pearls around Jack's neck, most costly and rare.

Then the tumult became uproarious when Jack received the presentation,
And he thanked the Lady Joan for the handsome donation;
Then all the ladies did loudly cheer, and on Jack smilingly did fan,
And Sir Walter Manny cried aloud, Sir Jack, you are a lucky man.

Then the mirth increased, and louder the applause,
And the Countess Joan asked, after a pause,
Tell me who has gained the love of the Knight o' the Cudgel;
Then Jack replied, My lady, you know her right well.

She is the lovely daughter of noble John of Aire,
Then, replied the Countess, she is a lovely creature, I must declare;
And I hope the choice that you have made won't make you grieve,
Then Jack kissed the Countess's hand, and took his leave.

And he wended his way to his beautiful estate in Kent,
And many a happy day there he spent;
And he married the lovely daughter of John of Aire,
And they lived happy together, and free from all care.

Your logic defeats me
but The Tragedian was pish
if only I could be as famous
with rubbish such as thish...

Truly you are a master!

I do think that rhyming pish with thish was a touch of genius :) The Nobel award for this current Taysider can only be a matter of time.

With the Nobel Prize for Pish what one of us could not then regard our life as perfect and complete?

Life would indeed be complete sir!

"Therefore, take the Countess by the hand, and plight your troth."

Surely taking the bull by its horns was mentioned in real life, but that's poetic license at work for you...