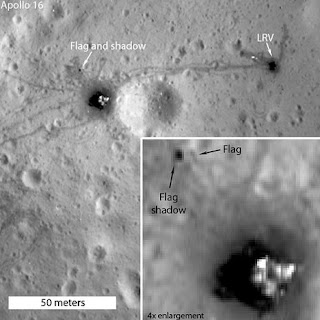 NASA has released  photographs showing that  most of the flags placed by crews of the Apollo spacecraft are still standing on the Moon. Shadows cast by five of the six US flags put up in the 1960s and 1970s are visible on the surface of the Moon. The Apollo 11 flag was knocked over as the Apollo 11 craft began ascending from the surface.

Mark Robinson, an investigator with the Funar Reconnaissce Oribiter Camera (LROC), said: "From the LROC it is now certain that the American flags are still standing and casting shadows at all of the sites, except Apollo 11.

The flags may not have retained their vibrant red, white and blue colours though. Exposure to heat, cold and light may have caused them to fade, Dr Robinson added.

Well there you have it. I doubt that the "hoaxers" will believe a word of it but then they are a bunch of arseholes
Posted by jams o donnell at 4:28 pm

But seriously, an evocative sight (and an evocative site too). I do wonder why we bothered though, given events since. I'm a robotic explorer fan myself. Good luck to the new Mars lander on its dangerous descent to the surface next week.

Sometimes I wonder why we went given the follow up or lack of it. I love the robotic explorers too. I hope to see the pics of Pluto from New Horizons in a few years time

There will still be deniers Jams. Nice to know the evidence is still there.

Deniers would still deny if they went to the Moon!

Bunch of arseholes is a true definition, but entertaining at that. Besides, these pictures are somewhat funky... Phot... no, OK, I shall leave it at that.

Haha I daresay the deniers are saying that word you did not finish!