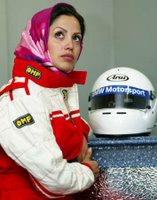 Two years a ago Laleh Seddigh became the first woman to compete against men in any sport since the Islamic Revolution and became Iran’s national rally car rally champion. Two years on and her driving career seems to have stalled after she was banned from participating in a race by the country's motor racing authorities.

"I thought I had been given the go-ahead," she said. "I was walking towards the grid thinking, thank God this has been resolved, when they shut the door on me. They said they didn't know why, but the head of the federation said I wasn't allowed to participate."

It was the first time Seddigh, had been excluded from a contest. Senior federation officials said they had been unable to obtain permission for her participation. However, Seddigh believes she was banned to prevent her earning enough points to repeat her championship success, which won her international fame but upset Iran's male-dominated religious ruling establishment.

Seddigh says a Muslim cleric has already issued a fatwa - a legally binding religious ruling - stating that there is no religious bar to women racing against men provided Islamic dress code is observed. She plans to use the fatwa if she fails to persuade federation officials to grant her permission to take part in future races.

The federation's vice-president, Hossein Shahryari, said Seddigh had been barred because of a government circular restricting women to female-only events. That decree has now been lifted, he said. But he added: "Women are speaking highly of themselves and that causes men who sacrifice their lives in this sport. Women are not champions in this sport, they are only participants. If they observed Islamic regulations more they would not have such problems."

She is a real heroine.

Does this mean that she won't be showing up half naked on the pages of Maxim anytime soon? I love how Danica Patrick did that risque photo shoot and then begs people to take her seriously. I've never seen Jeff Gordon or Dale Earnhardt Jr. in a come hither pose in revealing clothes.

Anyway, maybe she needs to defect and try her luck in another less Taliban beholden country. With her standards of modesty, she'd be a much needed role model for girls everywhere.

At the end of the day, it is people like Seddigh who will end the totalitarian rule in Iran. The more individuals challenge the ridiculous rules and obsessive guidelines, the harder it will be for the government to press back against all of them.

Thanks, Ren. It certainly took my notice

Somehow methinks she wont be on said mag's cover.. the sort of mag that her no real interest for me anyway!. It struck that she was another good example that iranian women aren't as they are protrayed.

Apparently she does go abroad to race in Formula 3. well as far as Bahrain anyway. THe thing is that she may not wish to leave Iran. Say she may well despise the leadership for all I know but perhaps she loves Iran and wants to stay/

Women are likely to be significant agents of change in Iran in the future. Iran's leadership are not the Taliban (the Taliban and Iran were sworn enemies!) but the sooner they are gone the better it is for the people of Iran in my view
)

Ah Roland you posted as I was writing this (or getting side tracked!)It is going to be the women of Iran who will ultimately play a huge part in effecting change

Jams, history in general or the not- wives taught you about the true nature of history (wymin)? Just asking...you did have some queens, you greedy imperialist. Back to what is more imprtant, a very nice post this one. I agree with you and Roland.

Jesus my spelling and punctuation has gone to shit! A long day and my brain hurts! We have had 6 (or 7 if you include Lady Jane Grey) Queens.. not many of course..

Glad you like it the post, Red. It is nice to show (again) that Iranian women aren't chador clad stereotypes

I meant it as a Talibanish mentality as far as oppressing women obviously destined to rise above the subservient status quo.

I wonder what Seddigh's male colleagues feel about this crab? I won't be surprised if they are against her, imagine being floored by female! That would be pretty for one's reputation in Islamo-mascho-chauvinistic Iran.

The mentality can be crazy indeed ewbl .. it is only very recently that women were allowed to watch football matches again.. surprisingly or not a lot of Iranian women are ferventl soccer fans!

I can only imagine what it did for their egos Imnakoya. It surely pricked them considerably..How sad I say!

well she has been &will be competing with guys here again. so it has nothing to do with her gender if she`s been banned temporarily,as she was accused of cheating in games,you see....laws are laws, for every1 ,not just girls ,& I as a young girl living in Tehran, don`t face any particular limitations or restrictions &i do whatever i wish....so comparing Iran with Taliban`s is totally gross , you could at least compare Taliban with the USA government since Taliban `s a known American puppet who`s always been armed&funded by the USA, while they `re our enemy &been charged for killing our diplmats in Afghanistan

Talibans & Al-ghaeda are the children of Senior Bush and Reagan.
While they wee fighting Russians in 1980s, they were funded by the US. government to succeed against Russians. Again, before USA attacked Iraq,Bush was plotting to create another war between Iranians and Iraqis like his father and Reagan did in 1980s when they were friends of Saddam Hossein and funded him to kill Iranians and take their 2 states that have oil wells.
Wake up people. Stop being ignorant.

The government of USA is the one who has supported and created terrorists. People in USA are being fed by twisted lies & misinformation & are kept ignorant.
USA Media never tells the truth about what bunch of blood suckers are doing behind the sceans under the pretext of War on Terror.