The best pictures of Pluto yet 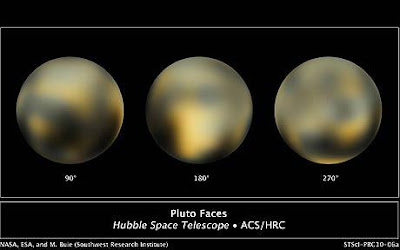 NASA has released what truly are the most amazing photos of Pluto. The images were taken by the Hubble Space telescope.

The images reveal a treacle-coloured, mottled world with a peculiar bright frosty spot. They will be the best images available of the distant dwarf until 2015 when the New Horizons probe approaches it in 2015.

A Nasa spokesman said. "The Hubble pictures are proving invaluable for picking out the planet's most interesting-looking hemisphere for the New Horizons spacecraft to swoop over when it flies by Pluto in 2015.”

Principal investigator Marc Buie, of the Southwest Research Institute in Boulder, in Colorado, said that the images allowed astronomers to better interpret more than three decades of Pluto observations from other telescopes.

"The Hubble observations are the key to tying together these other diverse constraints on Pluto and showing how it all makes sense by providing a context based on weather and seasonal changes, which opens other new lines of investigation," he said.

I am looking forward to seeing what New Horizons reveals, Until then I can look at these images and say “Wow!”
Posted by jams o donnell at 9:55 pm

Email ThisBlogThis!Share to TwitterShare to FacebookShare to Pinterest
Labels: pluto