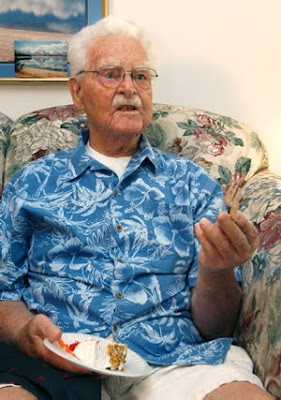 Born on July 23, 1900 he enlisted in the Canadian Army at the age of 15. The medical examiner recorded his "apparent age" as 18, which meant he was allowed to train.
Despite being under the legal age to fight, which was 19, he persisted in his attempts to get to the front line. He lied about his age again, and sailed to Britain with the Royal Canadian Regiment. There, conscripts under the legal age of 19 formed the Young Soldiers' Battalion to train until they were eligible to fight. But he never saw action as the armistice was signed six months before he reached his 19th birthday.

He moved to the US in the 1920s, serving in the United States Army between 1921 and 1924 He tried to enlist in the US military again in 1941 but failed when it was discovered he had never become a US citizen.

He died in Spokane, Washington, where he had lived since 1932.

They have been a bit like dominoes this last few months. I guess it is due to their advanced ages. It is admirable the have lived to such wonderful ages!

It is definitely admirable. THe last three will die in a few year sadly,

I lived in London during part of the Vietnam War and knew a couple of guys who'd left the states because their work visas hadn't protected them from being drafted. I think even this country was more civilized during the world wars.

I believe the soldiers who fought in those earlier wars were brave and patriotic but I've read enough about the causes and conditions that caused them to remain skeptical about government power plays in general. Once upon a time in Canada the warriors whose bravery was recognized on Armistice Day grew older with each passing year. I think it's sad that there are young ones now.

He obviously liked a drop of whisky or beer to get that far. Or a good wife.

I bet he did James

This is the tragedy of wars Susan, its not the leaders or the other bastards who start the ewars who die in their thousands r even millions it;s people like Babcock who end up in the war graves.

Was that a recent photo? He looked great for 109!

I'm not sure but even if an old shot he still looked good for someone a lot younger!