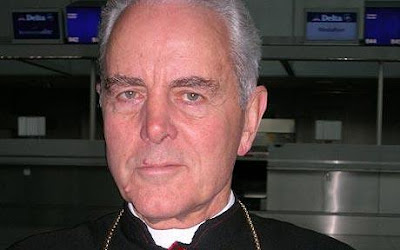 Despite facing a torrent of outrage at his revolting views, vermin Bishop Williamson seems to be unrepentant. According to the Telegraph a Der Spiegel report states that he has recently been telling colleagues in the ultra-conservative Society of St. Pius X it was a "huge lie" that six million Jews were murdered by the Nazis. He also told colleagues that "a completely new world order" had been built on the "fact" that Jews were systematically gassed in concentration camps such as Auschwitz, Treblinka and Sobibor.

The Spiegel report also revealed that fellow members of his brotherhood were deeply concerned by his behaviour, but were reluctant to cut him loose because he had laudable qualities (he makes pretty lampshades?). One priest branded him a "ticking time bomb".
Williamson is also due to face court in the southern German city of Regensburg on April 16 over allegedly Holocaust-denying remarks he made to Swedish television in January last year.

Denying the Holocaust is a crime in Germany. Williamson was on German soil when he gave the interview, though he claims he never intended his remarks to be broadcast there.

Williamson was given the chance to avoid court by paying a fine of up to 12,000 euros but decided to fight the charges instead.

What can you say about someone like Williamson except a long string of expletives? Perhaps he can take up bullfighting too
Posted by jams o donnell at 10:15 pm

[Did I mention in the previous comment section that I am a bit sarcastic tonight?]

I'd like to introduce Williamson to a certain barkeeper in Cairo whose eyes would start sparkling when he learned what nationality his customer was: "Ah, German. [Thumbs up]. Six million jews! [Winking]

This very barkeeper might get hep up about this idiotic Englishman's utterances. You see, he's so happy that six million jews got murdered at one swoop. And now this should not be true?!
I am sure this very barkeeper won't serve Mr. Williamson well.

Sacrebleu! Pousse le salaud de prêtre dans un fourneau, une heure par jour, pour un mois. Sorry, Jams! I didn't say to burn him. Just to stop him from breathing at ease, one hour a day, for one month. It might shut him up. To pay a fine will not bother him. Some people will send him money so that he can open his evil mouth again.

When I was younger my father would say,"put a sock in it" when he wanted me to be quiet.

Well, I have lots of incredibly sweaty socks to donate to the Bishop. STFU!

Jesus Sean Williamson and that Barman deserve each other. Perhaps you can introduce them in a large sack...

Now that is a good solution Claudia. I wonder if that would really make him think

I have many socks too Calum.Between us we can silence him!

Well, it's quite a potent shit the bishop is smoking: first it's a "huge lie" and then a "fact"?

Beside, these warts: someone should rearrange his face, having in mind warts removal. It was already done to Mr Irving - at least once.

It's incredible that anyone can believe and then utter such nonsense. that he is a bishop simply adds to the horror.

So sad! The business about the Bishop, yes...but all you poor mean little souls who have nothing better to do than vent your inadequacies. If you don't like what the man said then write to him, calmly, politely and ask him to explain himself. If all you can do is be abusive and foul-mouthed - not to forget Pharisaical, condemnatory and as bad as any member of the Gestapo then God bless you for you need His blessing to soothe your troubled minds and teach you to be less fascist than you think the Bishop to be

Why is "Old-fashioned Leftie" anonymous? We can write a few words to the Bishop (and maybe we do), but we can't address directly O-f-L's "pharisaical condemnations". A person, who hides behind anonymity to judge others, needs God's blessing more than we do.

To attack a man for talking nonsense is like finding your mortal enemy drowning in a swamp and jumping in after him with a knife. [Karl Popper]

I am sorry, Claudia, i am not 'anonymous...merely new to this. That said, Claudia, who are YOU? Who is Claudia? what is she? I see nothing that tells me aught of your particular claim to fame. Enlighten me, Claudia. Lighten my darkness and tell me what gives you the right to condemn others? I condemn none. If what I said stung you, Claudia, then the cap is clearly a good fit for you, at least. Come on, now, Claudia, fess up! Let's hear all about our Claudia - you know you want to be a star, don't you? That's why you write as you do, isn't it?

Sean Jeating is right...as was Popper. Some don't mind wielding the knife. especially when a man (or woman) is down. That is all they can do - they aren't up for anything braver, after all - ask Claudia

Denying the Holocaust is a crime in Germany.

I don't think it should be a crime. Send him to Coventry, yes but jail? It's the thin edge - what if my own views aren't liked?

James I don;t think denying the Holocaust shoule be a prison offence either.

Sean that is true but we still do it!

I doubt it would knock any sense in to him Snoopy!

That is so true Liz.

Claudia some criticise the critical ths becoming what they despise!

PFL you are entitled to your views but it sounds like you become what you criticise sitting in pharisiaical judgement over the commenters here.

James...thanks for your version of a reality check and when I need another I will be sure to think first and foremost of you. Tha said, I don't quite follow the logic (if there is any) in what you say. I see that here is screeds of criticism of Bp Williamson - do his critics become like him? If you are saying that then I agree, to some extent. Perhaps, rather, I should say that some of his critics have certainly exhibited traits the like of which they find repulsive in him (so they say, anyway). So far, I fail to see that they have shown anything of his undoubted intellect, as a quick perusal of his CV will attest his having. Abuse and plain nastiness never won an argument, outside of nazi Germany or communist Russia so I wonder why so many people seem to resort to it. Do you know why? By tthe way, I sit in judgement on none. Commentators show their colours by what they write. Invective and bile is the armoury of the intellectually bankrupt, as any charitable person must agree, surely? I condemn none. I merely point out that those who condemn so stridently are very, very thin skinned, when challenged. Thank you for graciously conceding my right to an opinion - at least you do not believe that all who agree with you are vermin who should be deprived of their right to speak.

"By tthe way, I sit in judgement on none. Commentators show their colours by what they write. Invective and bile is the armoury of the intellectually bankrupt, as any charitable person must agree, surely? I condemn none. "

Are you sure that you judge none nor condemn none but merely point out ...?

"but all you poor mean little souls who have nothing better to do than vent your inadequacies." is a fair bit more than non-judgement.


You said also, "Commentators show their colours by what they write." You are so right! Thank you for letting us see yours.

"If you don't like what the man said then write to him, calmly, politely and ask him to explain himself."

OFL - I am not the owner of this blog, of course, but I still want to recommend (calmly, politely and without a iota of rancor or flaming) that you cut your sermons short - to one or two words or summat. Then print out your sermons, roll them up and make a periscope out of them.

I cannot explain more, this blog belonging to Jams. He may want to, though.

Ahem ... I see that the one who was meant did not understand. :)

As for Mr Williamson: He is not talking nonsense; neither he is 'down' - he is a downright liar.

You said well what I wanted to reply, Sean.:) But "Star Claudia" (as I was called) didn't want to monopolise the space!!! Ha! Ha! Ha! I was amused.

Williamson is a lying shit Sean. As for Old Fashioned Leftie. I wanted to tell him to fuck off but I pulled my punches.

Claudia never worry about that!

Well said. Iwas just too polite to him