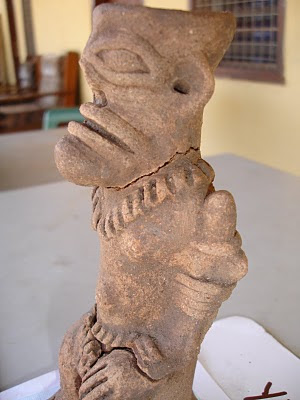 (From History Today magazine)
The outline of a human body has provided archaeologists with the first glimpse in possibly 1,400 years of a lost West African civilisation.

Acording to the Independent the discovery of 80 clay figurines from burial mounds in a remote area of northern Ghana is being hailed as evidence of a previously unknown society. It is hoped that the find will provide information about the region's pre-Islamic history.

A combined research team from the universities of Ghana and Manchester believe that the hundreds of mounds in the 20 square mile area of the dig were ancient shrines. "These finds will help to fill a significant gap in our scant knowledge of this period before the Islamic empires developed in West Africa," said Professor Tim Insoll of Manchester University. "They were a sophisticated and technically advanced society: for example, some of the figurines were built in sections."

However, so far the find has thrown up more questions than answers as scientists puzzle over what appears to be a deliberate practice of breaking the figures into sections and placing them beside human skulls. Ghana's Dr Benjamin Kankpeyeng said: "The relative position of the figurines surrounded by human skulls means the mounds were the location of an ancient shrine. The skulls had their jawbones removed with teeth placed nearby – an act of religious significance."

The figures, are believed to be between 800 and 1,400 years old. The next step for the research team will be to carry out analysis of the residues of material which were packed into holes within the figurines to provide more clues about the society."We are certain that these people filled the holes with something, but the question is: was it a medicinal substance, or blood, or other material from a sacrifice?" Professor Insoll asked.

This is fascinating stuff. Anything that provides a greater knowledge of our past enriches us all.
Posted by jams o donnell at 8:19 am

They were obviously premodern postmodern in art.

My question is why they weren't discovered earlier.

Ah! This typical chin! Now we are coming to know the origin of the Habsburgs.

Haha Beakerkin you could make a mint writing stuff like that!

Good point, Lack of resources in Ghana along with perhaps a lack of interest in colonial times


My sentiments too Kay!

Fascinating, I love it when new archaeological pieces emerge.

Me too Cherie. It is utterly fascinating