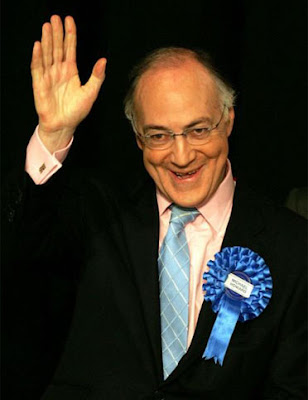 If there was one other alien in the Prince of Greyness’s cabinet in those dark days when the tories were last in Number 10 (John Major himself being a Kraptonian from a small planet orbiting Algol) it was Michael Howard whose reptilian features struck terror into the hearts of virgins across the country (except Ann Widdicombe of course).

If confirmation of his extra terrestrial origins were required then the Telegraph provides it. UFO files released by the Ministry of Defence (MoD) show that on 8 March 1997 there was a UFO sighting near Howard’s home in Kent while he still was Home Secretary.

Sophie Wadleigh, 25, from Hythe, reported the sighting to the Folkestone Herald. She told the newspaper: ''It was so peculiar, it all felt really odd and I heard this humming noise. As I looked across the field I saw a large triangular shaped flying craft hovering about 300 metres off the ground."

Further newspaper cuttings reveal Chris Rolfe, co-ordinator of group UFO Monitoring East Kent (UFOMEK), warned at the time the UFO could have been looking for Mr Howard. Mr Rolfe said: ''It would seem the UFO was disinterested in Sophie, the girl who reported it and watched it for quite a long time. ''This certainly makes it seem like it had a purpose and has left me wondering if its purpose had something to do with Mr Howard.''

An RAF investigation into the sighting was undertaken, but the findings found nothing unusual The Air Defence inquiry said there was ''no such security incident'' involving Mr Howard or and ''no such military activity reported anywhere, and, specifically, in the Kent/Folkestone area. Additional inquiries have confirmed that no unusual or unauthorised air activity, civil or military, was reported or observed in that area on that date.''

This rings a bell, I’m sure I read about this in UFO Magazine years ago, Or is my mind playing tricks on me,,, Anyway when Widdicombe said that there was something of the night about Howard perhaps she meant the stars as well as something sinister that lurks in the shadows....
Posted by jams o donnell at 9:49 pm

Actually he is from Llanelli - but we did have the Dyfed Triangle.

For all that they seem to know about the lives of ordinary people, I think quite a few politicians, possibly most of them, come from another world.

If only we could send them back!

Yep, mucho reptilian. I wonder whether it's one lost from our stockyard years ago.

He certainly is Snoopy!