The most romantic painting in Britain? 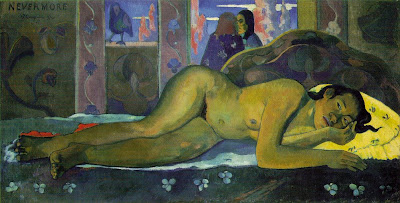 Nevermore by Gaugin has been voted the most romantic painting in a poll conducted by The Art Fund charity. It beat works by Jan van Eyck, Nicolas Poussin Titian and Samuel John Peploe.

Nevermore, which was first owned by Frederick Delius, the English composer, now hangs in the Courtauld Gallery in London. It was painted by Gauguin in 1897 in Tahiti, the Polynesian island which the French artist made his home in the latter years of his career.

Dr Ernst Vegelin, the head of the Courtauld Gallery, said: "I think people are drawn to this painting because it is so rich in its possibilities and it is not as straightforward as it might initially seem, with the raven and the figures in the background bringing a sense of mystery."It is certainly a very beautiful and memorable picture which one could look at endlessly."

Click here www.artfund.org/romantic to see the other shortlisted paintings
Posted by jams o donnell at 6:45 pm

It is certainly a nice painting although I am not sure I would class it as romantic. It was by far the best of the choices though.

I certainly don't find this painting romantic or even Romantic! I don't understand why anyone would. It's mysterious and slightly unsettling. Matthew Collings sure can waffle, can't he?

The woman looks pissed off and unfulfilled!

Good grief! There is nothing romantic about that painting at all, IMHO!

They don't have a clue...I think everybody on this page (so far) look more romantic than that painting. Specially D.E.

I agree it's pretty unromantic

Now, now. Romance is not all about wine and roses! It depends on how you define romance. I find it very romantic in the sense that it is exotic and mysterious. Since when has exotic and mysterious been considered unromantic? I think it has been throughout the ages. Even tragedy has had romance in art, literature and poetry.

I wish people would think a bit beyond about the TV tells us and consider all the factors around a work of art - it wasn't painted yesterday.

Thank you for posting this, Jams! I love Gaugin. One of my all-time favorites.

The romance of the South Seas Paga? I know what you mean but still teh painting does not evoke that for me. I like Gaugin very much too

Some people might liken it to snot green though. Not sure about the colouring.

ut;s not one of his best