The banality of evil - Cambodia 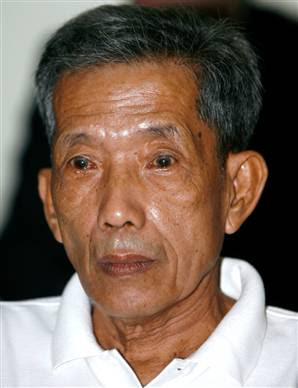 Kang Khek Ieu was a Khmer Rouge torturer who oversaw the deaths of 17,000 people. An interview with him featured in today’s Independent. If Hannah Arendt had not already coined the phrase banality of evil, someone would surely invent it for this man. Better known by his nom de guerre Duch, Kang Khek Ieu was one of Pol Pot's trusted henchman.

Asked whether he had any moments of uncertainty, any doubts or feelings of rebellion while he set about wiping out his country's entire intellectual class, he answered: "There was a widespread and tacit understanding. I and everyone else who worked in that place knew that anyone who entered had to be psychologically demolished, eliminated by steady work, given no way out. No answer could avoid death. Nobody who came to us had any chance of saving himself. All the prisoners had to be eliminated. We saw enemies, enemies, enemies everywhere. If I had tried to flee, they were holding my family hostage, and my family would have suffered the same fate as the other prisoners. If I had fled or rebelled it would not have helped anyone."

Of the Khmer Rouge’s two million victims, more than 17,000 musicians and dancers, were brought to a former school in the heart of Phnom Penh that had been converted into a torture centre. Only six came out of it alive. Codenamed S-21, the centre was run by Duch, a former maths teacher who had become the head of the regime's secret police. In the former classrooms, over a period of 40 months, Duch oversaw the extermination of the entire Cambodian intellectual class with mathematical rigour.

Confessions were extracted by primitive torture: prisoners were strapped to iron beds, suspended upside down from ropes, threatened with drowning, tormented with knives and pincers, locked in tiny cells. Then, at night, they were taken by lorry to the outskirts of Phnom Penh and killed in the rice fields. The Khmer Rouge were obsessed with killing by night.

Duch, the nickname he assumed when he was young and joined the guerrillas, told me that the torture centre at Tuol Sleng was set up in August 1975, four months after the Khmer Rouge entered Phnom Penh, and began work two months later. "I was given the task of creating it and starting it up, although I never found out why they chose me. Before 1975, when the Khmer Rouge lived in hiding, in the jungle, or in the liberated zones, I was the head of Office 13, I was the chief of police in the special zone bordering on Phnom Penh."

"Every day I had to read and check the confessions. I read from seven in the morning until midnight. And every day, towards three in the afternoon, Professor Son Sen, the minister of defence, summoned me. I had known him since my time as a high school teacher. It was he who had asked me to join the guerrillas. He would ask me how my work was going. Then a messenger would arrive, an envoy, who collected the confessions that were ready and took them to Son Sen. These messengers were the only links between one office and another."

"I obeyed. The work carried on until 7 January 1979, when the Cambodian liberation forces, supported by the Vietnamese, conquered Phnom Penh. There was no escape plan, no pull-out plan " After the fall of the Khmer Rouge, the executioner blended back in among his countrymen, and disappeared, as so many did in the post-war chaos, swallowed up by the void.

Many years later he was converted to Christianity by American missionaries. His true identity was discovered in 1998 and soon afterwards he was arrested. After years of argument between the Cambodian government and the United Nations, the surviving members of the Khmer Rouge hierarchy are finally being brought to justice. They will be tried under a hybrid UN-Cambodian tribunal known as the Extraordinary Chambers in the Courts of Cambodia; the pre-trial hearings began in November and are still going on. Pol Pot, is long dead as is the bloodiest of his comrades, Ta Mok, died in 1996. But five senior leaders including Khieu Sampan, the Khmer Rouge president, await trial.

Duch made his first appearance in court in November when his lawyer asked for him to be let out on bail because his "human rights had been violated, even if he was not beaten or tortured". A ripple of ironic laughter ran round the courtroom. The request was rejected.

What more is there to say but hope he his remaining years are long and miserable?

Sometimes I entertain morbid thoughts and I wonder if I have what it takes to stand up to evil and refuse to be participatory in it no matter the cost. It's tough to think that my family may be killed if I refuse. Not sympathisizing with this guy at all, just thinking out loud.

Alternatively he can be forgiven by us but he'll meet a higher court later from where he'll get no mercy.

Bretwalda, how can we forgive in the name of the victims?

Jams, if you wish a log life again to these butchers, Anna Planeta will come, and she is not in her forgiving mood.

James Looking at someone like Duch I would dearly wish there was a vile afterlife in store for him.

It's a tough decision Elastic. In adverse situatiosns some people will collaborate, some will resist. Most will put their heads down and try and get on with things as best they can

He, like Hitler's Nazi henchmen, deserve nothing more than a life of complete pain and misery...

I agree teach. I don't support the death penalty even for scum like this. THat does not mean I don't want him to be punished severly for his crimes though

I agree with you. Funny how life's twists turned out. I once went to a village where almost all ex-Khmer Rouge soldiers were resettled for interviews. It was a strange feeling all the while doing the interview - talking to people who had been involved in such atrocities.

Oh God ZJ I can imagine how strange that was. WHat's the feeling in Cambodia to this trial?

Anonymous said...
This comment has been removed by a blog administrator.
5:18 pm