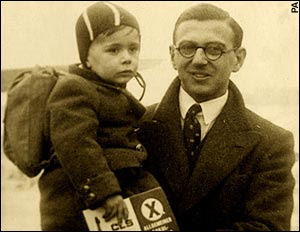 A 98-year old Briton has been nominated for the 2008 Nobel Peace Prize. The person in question is Sir Nicholas Winton who in 1939 arranged for the transport of nearly 700 Czechoslovakian Jewish children to the UK

In the spring of 1939, the young Nicholas Winton cancelled a skiing holiday in Switzerland and, at the urging of a friend, went to Prague instead. Nicholas Winton was particularly shocked by the condition of the children: many of them he found living in squalid - and freezing - refugee camps. With a group of others he drew up a list of children whose parents would agree to send them to Britain until the emergency - however long it was to last - was over.

He lobbied the Home Office in London. They said he could bring as many children as he liked, provided he could find foster families for them, and provided they went home when it was safe to do so. He then organised a series of closed trains to take the children from Prague directly to Liverpool Street station in London.

For nearly 50 years Winton lost contact with the children he had brought to Britain, including director Karel Reisz and Labour politician Lord Alfred Dubs. He did not even tell his wife Grete what he had done. It was not until 1988 when she found a scrapbook in their attic, with all the children's photos, names, and letters did she learn the whole story (The scrapbook is now held at Yad Vashem)

By the time his deeds became known there survivors and their descendants numbers over 5,000 "Normally events that happened a long time ago diminish in importance as time goes on," Sir Nicholas has said "This story is the opposite - it keeps on growing, because there are more and more people. They keep breeding, you see!"

Perhaps it is time for a self effacing hero to be awarded this high accolade. He is far more deserving that quite a few previous recipients.

My thanks to Snoopy the Goon for drawing this story to my attention
Posted by jams o donnell at 4:58 pm

Well, do you mean they are actually going to give it to a deserving case... really ?
A.

Most good work seems to be done by local types who put their ideals above the drudge work cabal of paper pushers.

WEll they got a nomination Aileni

In so many cases that's correct Beakerkin

I like it when good works are done without promise of media attention, accolades, and fanfare. Those are the people that deserve to be rewarded. :)