Cranach advert banned on the underground 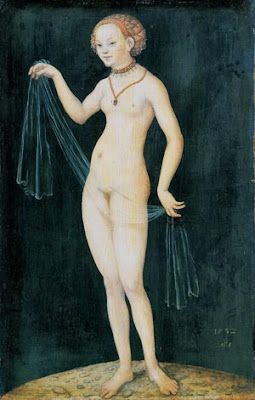 A nude figure of Venus dressed in nothing but a necklace and a little gauze was intended as the main poster for the Royal Academy's show on the German artist Lucas Cranach the Elder. The 16th Century artist was noted for his sensuous nudes despite and was a close friend of Martin Luther. However, the design has been thrown out as the poster, which was planned for display in scores of tube stations across London, was about to go to the printers.

"Millions of people travel on the London Underground each day and they have no choice but to view whatever adverts are posted there. We have to take account of the full range of travellers and endeavour not to cause offence in the advertising we display," a spokesman said. London Underground advertising is vetted by a firm called CBS Outdoor, and Venus seems to have fallen foul of the guideline that advertising should not "depict men, women or children in a sexual manner, or display nude or semi-nude figures in an overtly sexual context".

Six years ago the National Portrait Gallery had to create a special, more modest poster for the underground of a 17th century painting by Lely of the Countess of Oxford with one breast bared (above). However, the academy doesn't have a Venus under wraps. "We don't have a version B where she's got her clothes on," a spokeswoman said. "We're just hoping they change their minds and accept her."

Although Venus is nude it does not strike me as being particularly provocative. It certainly is not offensive to me. People will get to see plenty of adverts with far more overt sexual top, middle and bass notes than this painting

Perhaps an artist could cover the Venus' 'unspeakables' by adding a burqa?
What's PC? Perfectly crazy?

Hi, jams. I tried to leave a comment earlier but the computer [not me, you understand] went strange. Anyway, I can't see what is offensive about either image and surely people of all cultures see worse in their day to day lives?

Sea, Welshcakes I agree, I just don't see any big problem with either painting.

I haven't travelled on the tube for many years but, as I recall, it used to be full of images of scantily clad women!

Oddly enough, I check out this story on your blog at work, where I use IE, and it locked up right over the picture of the nude Venus. I must say, I got many co-workers around me peering in on it, and made me feel a bit uncomfortable! Maybe that’s how all those old squares feel when they see it in a public place.

Of course, Jams, we should take into account the people (of all major religions) that get overexcited by a mere naked ankle. Either that or distribute Valium to them before they get on a train...

Er... any squeak from Rowan Williams on that matter, by the way?

I doubt the people who ride the Underground everyday were even asked their opinions....

jean seating.
I never knew IT could speak. :)

oooh ankles, I'm all overstimulated even at the thought, Snoopy. I wonder if Rowan will be keeping his mouth shut for a while.

Maybe the tube guys are worried about what some imaginative vandals could do with an indelible marker?

I'm not sure there are very many depictions of Venus wearing clothes.

Very true and it's not likely to be particularly corect anatomically speaking!

I am only now seeing this on your backpost thumbnails.

I recall reading about this on an online news site and saying WTF - but then again, my world soaked with art!