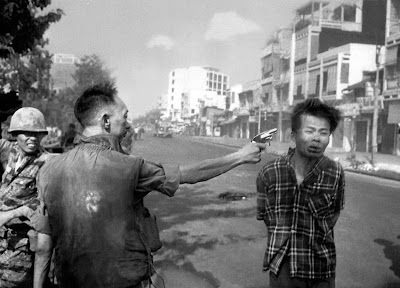 Last Friday (1 February) was the 40th anniversary of one of the iconic images of our times. On 1 February 1968, with the Tet offensive in its early stages Eddie Adams photographed South Vietnamese officer General Nguyan Ngoc Loan executing a Vietcong prisoner. I did not realise until today when I saw an item on Daniel Finkelstein’s Comment Central column.

For me (and probably most everyone else – apart, probably, from those who were there at the time), this and the one of Phan Thi Kim Phuc running screaming along a road are the two images that spring to mind when I think of the Vietnam War. For me most it is a dreadful image, a powerful statement of the brutality of war. I must admit I knew very little about the background to the photo. I found Adams’s feelings about the photo interesting and not what I had expected.

According to Horst Fass (who at the time working at the Saigon office of Associated Press). Eddie Adams’s boss Hal Buell reconstructed the events immediately surrounding the event:

"Adams watched as two Vietnamese soldiers pulled a prisoner out of a doorway at the end of the street. The soldiers then pushed and pulled what appeared to be a Viet Cong in a plaid shirt, his arms tied behind his back. They escorted the man toward the spot where Adams and Vo Su (an NBC cameraman) were located.

Eddie Adams said, 'I just followed the three of them as they walked towards us, making an occasional picture. When they were close - maybe five feet away - the soldiers stopped and backed away. I saw a man walk into my camera viewfinder from the left. He took a pistol out of his holster and raised it. I had no idea he would shoot. It was common to hold a pistol to the head of prisoners during questioning. So I prepared to make that picture - the threat, the interrogation. But it didn't happen. The man just pulled a pistol out of his holster, raised it to the VC's head and shot him in the temple. I made a picture at the same time.'

"The prisoner fell to the pavement, blood gushing," Buell wrote, quoting Eddie. "After a few more pictures of the dead man, Adams left."

The shooter was later identified as Lt. Colonel Nguyen Ngoc Loan. Adams said he walked up to him and said, "They killed many of my people, and yours, too" and then just walked away.

South Vietnamese sources said that the executed man had commanded a Viet Cong assassination platoon, which on that day had targeted South Vietnamese National Police officers and their families. The sources claimed that that the man had been captured near the site of a ditch holding as many as thirty-four bound and shot bodies of police and their relatives, some of whom were the families of Loan's deputy. The executed man has been identified as Nguyen Van Lem who may have been a political operative rather than the commander of an assassination platoon.

According to his AP obituary (he died in 2004) Adams felt “so defined -- and haunted -- by the picture that he would not display it at his studio.” He also felt it unfairly maligned Loan, who subsequently moved to the USA "The guy was a hero," according to Adams said. "Sometimes a picture can be misleading because it does not tell the whole story," Adams said in an interview "I don't say what he did was right, but he was fighting a war and he was up against some pretty bad people."

I knew virtually none of this yesterday. It does not make me feel that the photo is a powerful image of the ugly face of war (as if war has a beautiful one) I don’t condone the action of the officer . Should I be surprised by Adams’s view? I don’t kknow. What it does show is that an image can certainly take on a life of its own divorced from its original context.

I did know the story behind the picture. In the days of three networks and a few odd press agencies
this type of misperception did happen.

We did see a modern glimpse of media manipulation at Qana. This is what happens when reorters try to fit a narrative rather than report facts.

To Beakerkin shooting a prisoner in the head on the street, represents justice.

Stories that came out of Vietnam were censored so as to not offend the U.S. or French. No-body can comprehend the real story, or the events that transpired prior to that photo.
One thing for sure, War is ugly!

That photo could be captioned: 'the face of democracy.'

War is only an excuse to drop all pretence of civilization and civility.

Truly a powerful picture. In my more radical days, I used to think it was the epitome of American supported totalitarianism, but I don’t see the picture the same way these days. All I see is how ugly War is…there just happens to be fewer pictures of the horrors the Vietcong and the North perpetuated on their own people in ready circulation within the West.

Thans for your coments. For me it sitll is a powerful image that shows the ugliness of war.

It is funny that a person who is an apologist for communism specifically
the war criminal Trotsky would project his foibles on other. The man was an assassin and the rules of unlawful combat treat POW's differently than those in Armies.

Leave it to a person who venerates Trotsky to project his blood lust onto others.