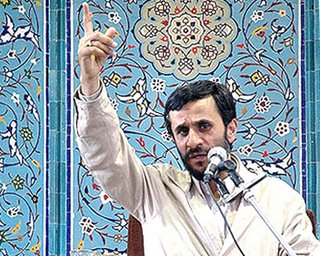 The Guardian, BBC and most other quality papers report the rise of a new star in the Blogoshere – None other that the people’s friend (unless if Jewish or American of course) Mahmoud Ahmadinejad. Imaginatively titled Ahmadinejad.ir his first entry is a fairly lengthy autobiography interspersed with fulsome praise for Ayatollah Khomeni. As an added bonus you also get to vote on whether you think the US and Israel are trying to start a new world war (about 57% against at present).

His entry into the Blogoshere is probably an attempt to communicate directly with ordinary Iranians over the heads of the nation’s elites. Given that is available in Arabic, English and French as well as Farsi he surely has an eye on an international audience.

Ahmadinejad may be wily and intelligent but starting this blog he is showing himself to be a hypocritical bastard. Just take a look at a site like Reporters without Borders and see what happens to other bloggers in Iran.

How many 'ordinary Iranians' do you think have access to the internet?

Less that here or the USA of course but there are more than a few internet users in Iran these days.

Omar, many: even if many sites are filtered, and the connection (dial-up mostly as ADSL is way too expensive for "ordinary" wages, cable as non-existent, and for most not available) shitty. But they are very present, and their problems - if caught blogging - very real. The persianblog has many "ordinary" Iranian users for example, that is mostly in Farsi; the blogspot also very popular. I these won;t be filtered, though the opposite is probable..

Iran is a highly reactionary state and your link regarding journalism and bloggers proves this. Free speech is an essential right for humans and it's awful to see anyone go without it.

I think it would be much more appropriate and courageous if Ahmadinejad were to take a real "bold stance" and speak out against the injustices of the Iranian government. The U.S. isn't perfect and I won't pretend it is but at least for the time being we do offer and honor basic human rights.

I think it's a bit more complex than that. I closely monitor my site meter. There are countries (North Korea, Libya, Syria, Burma, Cuba), from which I never get ANY visitors. Zero. Zilch.

But I get quite a few visitors from Iran (much more than from allegedly more 'free' countries like Algeria, for example).

I know Iran is far from free. But compared to others, it is relatively less opppressive than many other countries.

It certainly is a reactionary state. It struck me as astonishing that Chavez would cozzy up to Ahmadinejad. The people of Iran deserve far better than they have got from Islamic rule (and from the bankrupt shahs before that). Hopefully one day they will get it.

I fully agree on the point about Iranian cinema Sonia. What films I ahve seen are superb.

I talk frequently with two Iranian artists (I have blogged about them previously). It is good to get their worldview. It does not surprise me that other countries never make it to your site Sonia There are worse nations that Iran. By comparison Iran is a lot better than those (North Korea in particular) but still that does not make it particularly good!

if we didn't have to spend all of our time fighting the numnuts here at home, perhaps we could strategize the best way to handle a real growing threat on the horizon. we have been so busy trying to clean up bushco's fiascos that we have had no time to devote to anything other than wondering when bushco will invade iran. sad really.

Jams, I was just as surprised about Chavez. To date, it's the only thing he has done that has given me cause for concern.

ok jams....been sittin for hours looking at blogs - there is a link for this everywhere! some say they cant get an english version.....yet they linked it anyway!

At least Ahmadinejad chose an exsquisite background for his photo op. Really, that turquoise piece in the background is eye catchingly gorgeous.

They ran the story about blog crackdowns in the Middle East in yesterday's paper. Sounds like a discouraging and dangerous plight to make your voice heard in other countries.

it certainly does.......make not mistake about - sometimews it's not good to be british or whatever............but i gotta say.....at least i'm not getting stoned to death....can you thinkof all the offences you carried out here that would have earned you a stoning? i would have been killed in my teens! possibly even before that

There is a lot going on out there in the world that may come back on us Betmo. An attack on Iran would be utter madness (an invasion is out of the question of course). Ahmadinejad is very wily but he is a pretty nasty piece when it comes down to it in my view. Dave Chavez really was an idiot to be seen even dead with him.

I daresay the publicity the blog has got has made it hard to access mullets. It is true the UK has a lot to answer for historically and currently (not that either of us is responsible for the past)but for all of it faults we are fortunate to have been born here.

I did like the contrast ewbl it sort of struck me as a beauty and the beast constrast! OH yes, being a blogger in Iran can be very dangerous.. unless you are the president!

jams, I caught excerpts from a 20/20 interview last week with Ahmadinejad, on the radio this morning. HOLY SHITE! That guy is certifiably nuts. Seasoned and left leaning journalist Mike Wallace, was called a "Zionist" by him for merely suggesting that we help arm Israeli forces in response to Iran arming Hezbollah terrorists. He also predictably denied the Holocaust and suggested that Europe(especially Germany) or the Unites States give a state to the Jews to be called Israel, because it's not fair that they should "have" Palestine.

He is very wily and very cunning. THat makes him a very dangerous man. On the other hand a lot of what he is doing is foolhardy. I am not sure where he is leading Iran. I hope for their sake it is not over the abyss.

Another extremist head case - we have plenty of those on both sides.
If you take his rhetoric in context to where his background from it is no different to that of Bush or Blair - they're all insane megalomaniacs.

Pisces, an extremist in power: and not less popular than the rest. Neither less dangerous, on the contrary.

As red rightly points out Pisces Ahmadinejad has quite a strong base of popularity in Iran. Blair on the other hand is now about as popular as as a dose of the clap. Blair will be gone soon - he is standing down. He may even announce it as soonas the forthcoming Party Conference