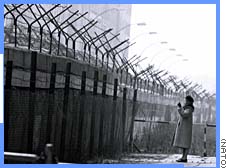 This article from today’s Independent is a dark reminder of the madness and sheer brutality of the East German communist regime.

Siegfried Noffke wanted nothing more than to be reunited with his wife and baby daughter. It was the summer of 1962 and less than a year earlier, the 22-year-old had been separated from his family by an event that took the world by surprise. On the night of 12 August 1961, armed units of Communist police and militiamen began cordoning off the eastern sectors of Berlin with barbed wire, and started reinforcing the divide with hastily erected breezeblock barriers. That was the beginning of Berlin's infamous Wall, the concrete and barbed wire Cold War barrier that divided Germany's biggest city for 28 years until its fall in the winter of 1989.

Noffke had been visiting relatives in West Berlin that evening. Like hundreds of others, he returned to a crossing point into East Berlin on the morning of 13 August but found it barred. His only chance of contact with his wife and daughter, left in the east, was to wave at them across the barbed-wire divide. He decided his only chance was to smuggle his family into the West. He joined a group that had started to dig a tunnel that aimed to break through under the Wall. When Noffke and his team broke through, they were met by East Germany's notorious Stasi secret police.

Noffke, one of the first out, was instantly machine-gunned to death. His colleagues were arrested and put on trial for "anti-state provocation". Unbeknown to the tunnel-diggers, a Stasi mole had joined the group and had kept the East Berlin authorities fully informed of their activities. Noffke's wife was jailed in East Germany for "anti-Communist conspiracy".

Then came scores of similar acts of murder perpetrated by the former East German authorities at the Berlin Wall. They were formally confirmed this week, The findings of extensive research by a German government-backed commission into deaths at the Berlin Wall has established that at least 125 people were killed trying to cross the barrier that divided the city during the Cold War. "These numbers are just the tip of the iceberg," said Hans-Hermann Hertle, a director of the commission organised by the Potsdam Centre for Historical Research. "The numbers are certain to rise, given that an estimated 100,000 people were jailed in East Germany for trying to flee to the West."

Statistics on the number of people killed at the Wall vary. Berlin's privately run Checkpoint Charlie museum puts the toll at 238 and estimates more than 1,000 people were killed at the Wall and in the heavily fortified and mined former East-West German border between 1961 and 1989. But even if the Potsdam commission's tally is conservative, the circumstances of its now officially confirmed Wall deaths make grim reading. In scores of cases, would-be East German escapers were shot dead at point-blank range or left in the no man's land between the Wall's fortifications to bleed to death from wounds inflicted by Kalashnikov assault rifles or machine guns.

The last person to be shot dead at the Wall was Chris Güffroy, a young East Berliner who decided to try his luck at escaping on 5 February 1989, months before the Wall finally fell. He had wrongly assumed the East German regime had suspended its order to shoot would-be escapers on sight. Yet Chris Güffroy was not the Wall's final victim. Four weeks later, 33-year-old Winfried Freudenberg died fleeing East Berlin in a gas-filled balloon. Freudenberg's balloon crashed in the West Berlin suburb of Zehlendorf and killed him instantly.

It certainly showed the Communist regimes in their true light. What sort of lunatics execute people for wanting to leave?

Megalomaniac lunatics, jams, that demand complete and total control over the populace.

This renews my concern for South America and its burgeoning Communist movement ala Hugo Chavez.

Lets hope that someday we'll get to remember the Israeli wall...

I found Chavez cozying up to Ahmadinejad pretty sickening but I wouldn't tar all of the recently elected leftist leaders in South America with the same brush. I don't think Bachelet in Chile or Lula da Silva in Brazil would have too much common ground with Chavez. Morales in Bolivia is an interesting character but again not quite in the Chavez mould perhaps

Time will tell piaces. What I dearly hope is that wre do not have memorials at the radioactive craters that once were Damascus, Tehran and Jerusalem

The Chavez propaganda is a little tiresome - Many very needy folk in a number of US cities were provided with cheap heating fuel my Venezuela - Chavez is a democratically elected leader (unlike some we know) who does not have the benefit of support from the Venezuelan media, most of which is owned/controled by those financed by the US.
He has eradicated illiteracy in his country and (most importantly) has cut the amount of oil money leaving the country and is redirecting it into projects that are rebuilding depleted industries within. Ergo the negative propaganda from the undemocratically elected Bush & co.

to call Bush undemocratically elected in 2000 was utterly justifiable but he did win the 2004 without the same level of controversy - not that I relish his presence in the White House at all (an understatement!)

I don't doubt that Chavez has done a fair few good things but my point was that despite the victories of leftist candidates across South America they are not necessarily alike. I really don't see Bachelet, for example, having an awful lot in common with Chavez in many respects.

On the other hand, cozying up to the likes of Ahmadinejad was at best an idiotic act. Having said that it is not hard to find a photo of Rumsfeld cozying up to Saddam in the 80s.