Never in the field of human was nothing owed by so many? 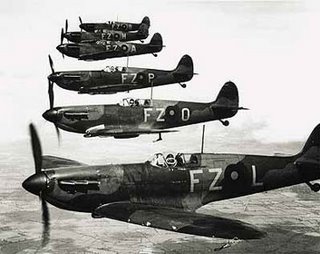 RAF Spitfires
Revisionism and controversy reared their head here in the UK during the week following the publication of an article titled “Pie in the Sky?” in the current edition of History Today. I decided to hold off from talking about this article until I had the opportunity to read it.

So what is this about? Three military historians who lecture at Joint Services Command and Staff College have concluded that the view that Fighter Command was the only thing keeping Britain from invasion in 1940 is an overblown myth. Credit for keeping Hitler at bay should have gone to the navy.

Andrew Gordon, head of maritime history at the college, said: "It really is time to put away this enduring myth. To claim that Germany failed to invade in 1940 because of what was done by phenomenally brave and skilled young men of Fighter Command is hogwash. The Germans stayed away because while the Royal Navy existed they had not a hope in hell of capturing these islands. The navy had ships in sufficient numbers to have overwhelmed any invasion fleet."

Not everybody agrees with this position: Bill Bond, founder of the Battle of Britain Historical Society, said: "There's always somebody trying to rewrite this historical period. Without air cover the Luftwaffe bombers would have smashed all the ports. The dive bombers would have just blasted navy ships out of the water. Unopposed, the Luftwaffe could have done what it liked. To suggest that the Battle of Britain is a myth is nonsense."

The article dos not denigrate the RAF or the role played by the pilots during the Battle of Britain or their bravery. What it tries to do is to put their role into context. – If Operation Sealion was a serious prospect (and that is a big “if”) then the invasion fleet (mainly tugs towing river barges) would have had to contend with Royal Navy and that, as General Jodl said, would have been “to send my troops into a mincing machine”

But what about the Kriegsmarine? minefields ? Surely with air superiority the Luftwaffe would have bombed the Navy to the bottom of the English Channel? All of these would have extracted a toll; this is true but consider this:

1. The Royal Navy had a very large Home Fleet, despite its global commitments. While U boats would have sunk more than a few vessels, the Kriegsmarine’s surface fleet in the latter part of 1940 was pitiful and was incapable of protecting an invasion fleet: all of its capital ships were indisposed while half of its destroyer force was sunk at Narvik a few months earlier.

2. The use of minefields would have slowed up the Navy’s advance but the Kriegsmarine’s minelyaing capability was limited to a handful of vessels. The Luftwaffe would have taken on this function too, but would it have been enough to stem the Navy? Very unlikely in my view.

3. The Luftwaffe was a powerful force and would have done a lot of damage to Naval vessels but without armour piercing ordnance and little experience of anti shipping action the damage would not have been enormous.

The article also rightly points out the role of Bomber Command. Even though it had very limited strike capability at that point in the war, Bomber Command did serious damage to the invasion fleet through its raids on channel ports in occupied France and Belgium.

Perhaps the article does underplay the role of Fighter Command. Its victory in the Battle of Britain ensured the Luftwaffe never obtained air superiority over southern Britain and that gave the German High Command (which had deep reservations over Operation Sealion in the first place) an “exit”. As important in my view is the fact that the Battle of Britain finally brought the people full behind the War. Before the Battle of Britain (and certainly following the fall of France) there were many who would have sought a settlement with Germany. These voices were largely silenced in the Summer of 1940.
Posted by jams o donnell at 10:51 am

You should see a Disney animated feature called 'Victory Though Air Power'. It brilliantly illustrates how air superiority allowed Nazi conquests of Norway and Crete, because of the superiority of land-based aviation over surface navy. It's an excellent, underrated film.

I have not seen that film. If it is up to the standard of Frank Capra's "Why we Fight" films then it will be worth a view.

Air superiority dertainly did prove its worth in the invasion of Crete. The Luftwaffe had the skills and ordnance to play and anti shipping role. It did not have that level of skill the year before. That is not to say that the Stuka and the Ju88 dive bombers would not have done quite a lot of damage to the Navy but the damae would ahve been less severe than it would have been a year later.

As for Norawy, I can't think of any significant naval losses to air stikes. The only British capital ship lost in that campaign was the carrier HMS Glorious and that was sunk by the Scharnhost and the Gneisnau.

can't everyone take credit and be grateful that germany was defeated? seriously.

Downplaying the RAF fole does have the danger of losing sight of the biggest victory and that was bringing the nation fully behind the war. Following the "Miracle" of Dunkirk (it was an astonishing feat don't get me wrong) there was also the psychological benefit of a victory to boost morale. God knows Britain needed to live off that boost for a couple of horrible years

I'm not an expert on military matters but surely the battle of britain was about air superiority, which, if the germans gained it they could destroy or neutralise the navy - or have carte blanche to bomb cities & industry.

Because they were unable to gain air superiority the blitz only lasted a relatively short period and an invasion was impossible.

It sounds to me like these "pro-navy" people don't seem to be making the connection between one sphere of operations and the effect it would have had on the sea had the victory gone the other way.

Thanks for your post jim hay. You do raise an important consequence of air superiority. While the Luftwaffe was not geared up to anti shipping action in 1940, concerted and sustained raids on ports like Rosyth and Scapa Flow could have caught at least part of the fleet in dock, or if not seriously damaged ist support capabilities. Thses raids could have been effected from Norway and might have reduced the navy's ability to defend againt an invasion.

Sorry, I did mean Jim Jay!