Mad Ludwig Not So Mad After All? 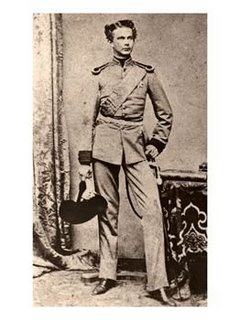 Staying with Germany for a third post Today’s Observer reports that King Ludwig II of Bavaria might not have been quite so loopy as thought: German scientists have shown him to be one of the unsung pioneers of flight.

Ludwig, whose fantastical castle at Neuschwanstein aptly featured in the film Chitty Chitty Bang Bang, drew up plans for a flying car more than two decades before the Wright brothers took to the air, but when he tried to build it he was declared insane and stripped of his crown. German aeronautical experts who have studied Ludwig's designs say they would have worked. Sketches recovered from letters between the ruler and Austrian engineer Gustav Koch show the monarch had planned to create a fleet of flying machines that would take him to his many castles. The craft he designed looked like flying cable cars powered by steam engines. They were decorated like peacocks.

But his dreams of flying over the mountains of Bavaria only convinced his opponents that he was mad, and he was declared insane on 10 June, 1886, and deposed. He died shortly afterwards and his drawings were consigned to an archive. Dalibor Karacic is working on the project to re-draw the machines. He said: "King Ludwig was unbelievably progressive. He understood technology. The flying peacock cars may have looked funny, but technologically they were sound and certainly would have worked".

This picture looks very couture - he was a fashion icon and he didn't even know it...;) the pose, the uniform...could be straight outta vougue!