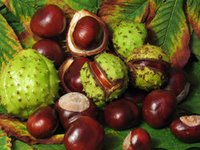 Britain's horse chestnut trees, providers of conkers for generations of children are dying in their thousands according to today’s Independent. THe trees are being hit by drought, pest attack and disease. On many, the leaves have already withered and shrunk, and conkers, the fruits of the tree, are not being produced at all.

Trees are being severely hit in many parts of Britain and according to the Forestry Commission about 10% of all horse chestnuts may already be affected - about 10 per cent of all the horse chestnuts in Britain. As branches tend to drop off the weakened trees, thousands of them on the fringes of urban streets may have to be cut down for safety reasons"I think you could compare this to Dutch elm disease," said Tony Kirkham, the head of the arboretum at the Royal Botanic Gardens. "The last thing we would want is another epidemic that wiped out a common British tree species."

The trees have already been stressed by three winters of drought. But now in their weakened state they are suffering from simultaneous attack by a pest, the leaf miner moth, whose larvae eats the leaves, and a disease known as bleeding canker. This causes a dark liquid to ooze from spots on the trunk of a tree, which can quickly develop into large damaged patches, spreading all the way around the branch or trunk until limbs fall off, or the tree falls over.

Chris Howkins, botanist and author said "At the weekend, here in Runnymede we couldn't find a horse chestnut that wasn't infected, and there are thousands of them. People don't realise the scale of it yet. They see these trees turning brown and they just think autumn is coming early. A lot of people won't have realised that this is actually death."
Posted by jams o donnell at 7:49 am

I haven't noticed any major problems with the horse chestnuts in our part of the country. They seem to have a healthy crop of conkers too.

I'll take a closer look next time I'm passing one!

I think the worst of it is in the south at the moment, Here's hoping that it is not as bad as the Indy reports.

must admit, I'd never seen conkers before. We have them in my local park - first time i realised what they were was because my man was reminicsing about playing a game of conkers

woo woo, I really hope this is not as serious as feared.. Conkers are great mullets, get yourself and the not wife out to teh park and collect them.

Then have play conkers, the not wife and me still do, that and blowing bubbles are still great fun.

So many happy hours I spent playing conkers with my friends as a lad. It is sad that the trees are being hit. Thanks for the info, Jams. Such an informative site. Always a pleasure for the eye and the mind.

I appreciate the military history -- had one uncle who fought in the Great War and my Dad was in the second and my borther in 'Nam. I am a pacifist and care for all three men deeply.

Bob said...
This comment has been removed by a blog administrator.
2:45 am

It sounds like a loss of something, taken for granted.

I'm not sure it is taken for granted Ren but it may not be preventable. We've seen similar before with Dutch Elm Disease.

I really do hope it is not as serious as feared Fraser. I think compulsory conkers would make for a happier nation!

I am touched by your kind words Fraser. As blogs go it is still in its infancy and I just write about what interests me, catches my eye or gets my goat! I really do like your blog too. I love your photos.


There will be more history coming. I have a number of works in progress littering my hard drive about the IRA/Nazi connections,and on Bomber Command. I have not even started on the "English" Civil War yet...

There will be more photography perhaps (not that I pretend to be much good!) I plan to get a digital SLR at long last. My Coolpix 4300 has served me very well but I need more capability to take some of the photos I want to take.

So, England doesn't have nuts. Wait, that sounds bad. Let me rephrase it. Enlgand is going nuts over losing nuts.

Perhaps, this is just a temporary blight, and you'll see a resurgence in tree health in the coming years. We have cyclical things all the time that endanger plant and animal life. Then it passes.

i like the sound of calling my man 'the not wife', not so sure he will appreciate it - but that's tough!

i think you will have to cope with your man saying to the kids"just wait until your daddy gets back...gonna tell him how naughty you've been

haha woo woo....he has read this and wonders if people think we are a gay couple!

I dearly hope it is a temporary blight ewbl Conkers are tops. I shudder to think that Horse Chesnuts will go the eay of the Elm.

your man a not wife mullets? Hmm I can see why he wouldn't appreciate that! On the other hand it is perfectly true...

Woo woo it is certaubly true that wait till your father gets home has more impact than wait till the not wife gets home!!!