Secret locations we knew about anyway

Today’s Guardian reports that the The Ordnance Survey has finally stopped falsifying Britain's maps, almost 80 years after the government first ordered cartographers to delete sensitive sites in the hope of thwarting German bombers.

The Landranger map series will, for example, now show the nuclear warhead plant at Burghfield, near Reading, previously shown as a mysteriously empty field while the access road appears for the so-called Corsham Computer Centre in Wiltshire, thought by conspiracy buffs to be Tony Blair's nuclear shelter. 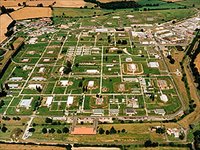 AWE Burghfield ( from its own official site)
Censorship started in 1927 when Prime Minister Stanley Baldwin secretly instructed: "No work of defence shall appear upon any map on sale to the general public” During the cold war, the Ministry of Defence listed 4,800 "key points" to be deleted. Censorship was later slashed to a more manageable list of super-secret targets, such as the Windscale nuclear plant, and GCHQ, the radio espionage agency.

But technology was moving too fast. Firms such as Multimap systematically made aerial surveys available from 1999, and now satellite pictures are available on the web and via software like Google Earth.

GCHQ (from a government better public buildings website)
Intelligence writer Duncan Campbell said the tampering was a "futile farce that creaked on 40 years after it had ceased to have any conceivable value. It didn't even stop Hungarian diplomats taking picnics outside Burghfield in the 1960s."

For many years, ironically, the most detailed aerial photos of Britain were those taken by the Germans in 1940!

I didn't realise that. I suppose I should not be too surprised!

I thought modern technology would have afforded us building cloaking devices by now.......and flying cars too.

Ah well I thought we would be living on the moon and commuting to Mars for work.. hiho

A few years ago I was auditing a school in Bermondsey and they showed me a photo of the school's previous building taken during the war with the shadow of the Messerschmidt visible.

When I was a governor of a Brixton School we had some photos of our local park taken by the Soviets.

Wow Gert that is a great pic to have. As for the Soviets I am sure they were REALLY fooled by the OS maps blanking out certain establishments.. on the other hand perhaps they were if they photographed parks in Brixton!