Another date for the Diary: Terracotta Army Exhibition, British Museum 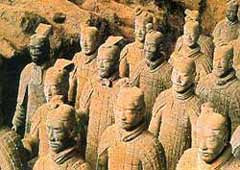 Time to order some more exhibition tickets – The British Museum is holding a major exhibition of artefacts buried with Qin Shi Huang, the first emperor of China (247-221 BC). Described as the biggest ever exhibition of treasures ever lent overseas from the emperor's burial site in Xian. The exhibition will not only include examples of the famous terracotta warriors but also ceramic bureaucrats, entertainers and birds.

Neil MacGregor, the British Museum's director, said: "We are delighted to be able to give visitors the opportunity to see these important and iconic objects. They are key objects for understanding the history of China from 221BC to the present day….This is the man who made China, created the idea of China, created the oldest political entity that survives anywhere in the world.”

The existence of a burial tomb for Qin Shi huang was known to scholars through the words of historian Sima Qian, but it wasn’t until 1974 that peasants digging a well came accidentally rediscovered the location of his tomb site which measures 50 square kilometres - about the size of Cambridge.

The Exhibition will be at the British Museum from 13 September until 6 April 2008. Interestingly it will be followed by an exhibition dedicated to Hadrian to examine why the Chinese empire survived for centuries while the Roman empire declined.
Posted by jams o donnell at 8:34 am

I hope these figurines are moved before Livingstone registers them to vote.

The Romans didn't burn all the books.

Never been a fan of Livingstone. He would have been a nobody had not Thatcher abolished the GLC. Sadly it made a sort of martyr out of him.

Ceramic bureaucrats? Is that the new official name for civil service crack-pots?

I've seen one such exhibit somewhere in my travels... I regret I cannot remember where I was, but that's not unusual for me... and it was most impressive.

Oh I am sooo jealous. I remember when I was a young teen and these things were first found. That will be a great show!

Steve, Elizabeth I am really looking forward to this. What's more I gather that the treasures of Tutenkhamen are due to return some time in the not too distant future. I went to see the British Museum exhibition back in the 70s as a kid.. Now that will be another date for my diary!