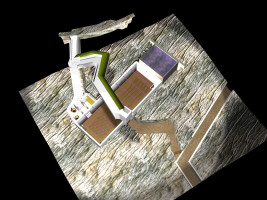 "Stay Behind" Cave
Today’s Independent carries an interesting but unsurprising story about one of those little fragments that makes history interesting. During WWII a plan, known as Operation Tracer, was put in place to leave a surveillance team behind on Gibraltar should it ever have fallen to Axis forces. Comprising of six men it would effectively be buried alive in a bunker so they could continue to monitor enemy movements.

A retired doctor from Preston has been named as the chamber's last survivor. As a young navy doctor Bruce Cooper he was called in to see Surgeon-Commander Murray Levick (a fascinating man himself – Levick had accompanied Scott on his Antarctic missions) and was told that they were looking for a doctor "to do something special". He became part of a team that included his friend Arthur Milner, an executive officer "Windy Gale" and three seamen, who would function as radio operators.

The team was warned that they may have to be sealed inside an operation post for up to a year, although they were aware that it could be longer. Once in Gibraltar, they lived under cover for two and a half years with the prospect of being moved up to the operation post to be sealed inside. The Rock was never captured, the team was disbanded and its members resumed civilian life.

It is not surprising that this sort of plan would be put in place had Gibraltar been overrun and its existence is hardly new news. The Gibraltar Caving Group rediscovered the team's base (“Stay Behind” Cave) in 1997, while the Telegraph carried the basic story almost 10 years ago when documents were made available by the Public Record Office

According to the Telegraph report, the Gibraltar scheme was deemed to be so full of potential that similar Tracer operations were to be put in place at Colombo, Trincomalee, Malta and Aden.

Tracer was stood down in August 1943 and the chambers sealed.

The Independent on Sunday published a short article about Gibraltar's "Stay Behind" Cave. The piece, written by Anne Penketh, made reference to the fact that 92 year old Dr Bruce Cooper has broken his silence about this top secret WW2 mission. The article also mentioned that researchers had met and interviewed Dr Cooper.

Unfortunately Ms Penketh's original piece was heavily edited by the Independent on Sunday which did nothing more than provide an account of what was already known ten years ago. The edited peice completely failed to cover the following three elements;

1. Dr Coopers description of the secret chamber that he was taken to in 1942 is in some aspects different to the layout of "Stay Behind Cave". This is now fuelling existing rumours that a second secret chamber is yet to be discovered. I have a sketch of such a chamber in my research files, it originated from an MI6 source. Further information has come from a former GCHQ telegraphist which suggests that tandem Operation Tracer units operated during the Suez crisis, so this may also have been the case in Gibraltar.

2. On several occasions during the past month a specialist team has been searching the Upper Rock area of Gibraltar for evidence of a second chamber and two areas are of
interest within MOD property.

3. Discussions are currently taking place in the hope of bringing Dr Cooper to Gibraltar to reunite him with "Stay Behind" Cave or to possibly identify the whereabouts of a second secret chamber.

I am actually one of the researchers who interviewed Dr Cooper on behalf of the discovergibraltar.com website. A substantial amount of information has been added to the website which includes MP3 audio clips of Dr Cooper talking, also photographs of him in 1942 as well as photographs taken of him at the meeting. The section also includes up to date information about Operation Tracer and photographs of Stay Behind Cave taken at the beginning of January 2007.

Thankou very much for this comment. I will update.