Yet another date for my diary – Amrita Shergill 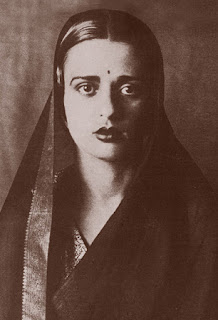 A major Hogarth opened exhibition opened with great fanfare at the Tate Britain on Wednesday this week while a retrospective of the work of Gilbert & George opens at the Tate Modern next week. Both have been well advertised and will attract many visitors*

Less well advertised is an exhibition of the work of Amrita Shergill that opens at the Tate Modern on 28 February. I was totally unfamiliar with her work until very recently and I am delighted to get the opportunity to see some of her work in the flesh so to speak.

Amrita Shergill - Self portrait
Amrita Sher-Gill is regarded in India as one of the nation’s most important modern artists. Her life and her art are a fusion of the Eastern and Western worlds. Born in Budapest in 1913 to an Indian nobleman and a Hungarian opera singer she spent her early life in Hungary and India before studying art in Florence and then at the Ecole Des Beaux Arts in Paris. In Paris she she came under the influence of Modigliani and Gauguin and her early works apparently reflect these influences strongly. 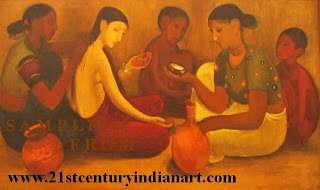 It was after her return to India in 1934 that her developed her true style as she began to interpret Indian life, particularly that of the rural poor. She was especially drawn to the private world Indian women as evidenced by vivid but melancholy works like ‘The bride’s toilet’ (above). Sadly she did not have a long and successful career. She died in 1941 at the age of 29.

More to follow once I have visited the exhibition.

A short biography at Collector’s Café.


An extensive site devoted to Sher-Gill’s life and work

* I went to the last big Gilbert & George exhibition at the Hayward in 1987 and I found it rather overwhelming – a couple of Gilbert & Georges together are fine, a lot together is rather tiresome. As for their work in general I’ve always thought of Gilbert & George basically saying “poo, bum, fart and willy” through the medium of art!
Posted by jams o donnell at 9:46 am

This is good news thanks. I want to see her paintings too