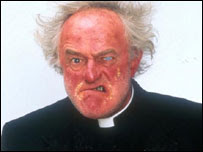 The weekend was not only about rugby: drunken priests and aspiring Mrs Doyles converged on Aran island of Inis Mor to mark the occasion of the first Father Ted festival.

There had been some controversy over which island had the right to call itself Craggy Island another Aran island, Inis Oirr, believed it had a greater claim than Inis Mor as the opening sequence contains a shot of the Plassey, a merchant ship wrecked there. In the end the the matter was settled by a five a side football match which Inis Mor won 2-0.

The festival included a Lovely Girls contest, a Hide a Nun and Seek and a Craggy Island Song for Europe contest. Father Jack’s sage words "Drink! Feck! Girls!" were intoned as if a prayer (and "Arse biscuits" too I would hope)

Oh to have been there!


If you are reading this and have no idea what I am talking about, Father Ted was a surreal sitcom based on an Island of the coast of Ireland and featuring three dysfunctional priests and a half insane housekeeper. It was one of the funniest things ever shown on tv.
Posted by jams o donnell at 7:59 am

Of course this is also the same Ted
you named your cat after.

Really?!!!?? I thought your kitty was named after Ted Danson. Although, your Ted is much better looking, jams. And his fur is real and not a fur toupee.

A lady at the baby name snob board I'm on uses Father Ted as an avatar. There's a lot of women and a few guys from all over the world there. It's interesting to hear the names they consider downmarket and "chav," in their respective countries.

This is true.. I must point ut that the pic isn't of Ted.. That is Father Jack!

Ted Danson? Perhaps as Becker! I am glad Ted is well used even to laugh at silly names... I will be doing a post about names shortly. I found some things I bookmarked then forgot about!

Remember that Danson was Becker and Beaker. My pen name is a tribute to my long suffering younger brother the beloved Rav Roov who looked like the Muppet. Everywhere he went he was upset because he was known as my brother.

I created my pen name in the spirit of the long family joke and used the pen name Beakerkin meaning realative of the Beaker. However, my younger brother is a clergyman and everyone now asks if I am his brother.

danson was beaker out of Sesame Street (or is that the Muppets or is that both?). I like the choice of name Beak. It is a nice tribute to a brither you obviously love dearly. The blog name is also the title of a children;s book isn't it?

As you may have seen, the Poor Mouth is a book by Irish novellist Flann O Brien, Jamsodonnell is a name from the book. The avatar is a no dead singer called Robert Calvert who used to be in Hawkwind.

On the Friends of Ted website there's an intriguing photo of gun-toting nuns abseiling down a building, SAS style.