Geniitals Day: The case of the nut ripping Pacu

The Daily Mail  reports that terror has struck  Illinois is in panic and terror after a Pacu was discovered in Lake Lou Yeager.

The Pacu a laeger relative of the Piranha has gained notoriety after a perhaps apocryphal story about the fish ripping off the testicles and killing two fishermen in New Guinea (The fish is a native of South America but had been introdued into New Guinea as a food source folowing overfishing of the nation's rivers). The fish is an omnivore and has thick sturdy teeth adapted to crushing nuts (of the kernel kind). 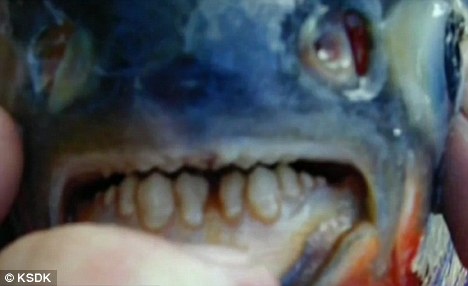 Families The pacu was caught by a fisherman on June 7 and that another one had been spotted two weeks later. The pacu were most likely dumped there illegally.

Local authorities were keen to dispel any fears. "It is a little scary seeing a fish with teeth,' said lake superintendent Jim Cadwell. "They are not native to this lake or this area. They are in the same family as piranhas, they are related, but piranhas have very jagged teeth, but pacus have teeth very similar to humans.
<'Their main diet is nuts, leaves, aquatic vegetation, snails. If their food supply is limited they will eat other fish."

Perhaps because the Mail is not available in the USA most visitors to Lake Lou Yaeger seemed not to be too worried.

So there you have it. It is a fearsome looking bugger but I would imagine that the knackers of Illinois are perfectly safe!
Posted by jams o donnell at 5:17 pm

"Their main diet is nuts..." doesn't sound very encouraging for the swimmers. Like the candiru wasn't enough:

Heaven forbid they ever team up with candirus!