It's the Sun Wot Done It: War Criminal Found in Budapest 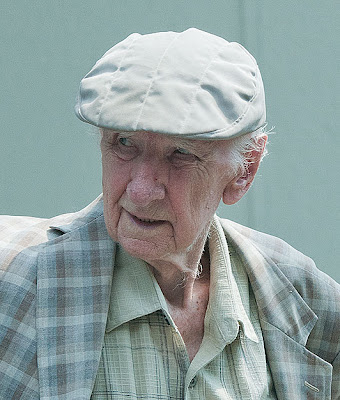 I missed this story a couple of days ago but The Sun tracked down a Nazi war criminal to his home in Budapest.  Ladislaus Csizsik-Csatary, 97, was a police commander in charge of a Jewish ghetto in Kassa, Hungary, during World War Two. He is alleged to have sent 15,700 Jews to Auschwitz.

He fled Kassa — now renamed Kosice in Slovakia — after the Allied victory and was sentenced to death for war crimes in his absence in Czechoslovakia in 1948 creating a new identify and life for himself as an art dealer in Canada.


When his past was discovered  i 1997 his Canadiancitizenship was revoked and the government began to build a case against him. He fled before deportation papers could be served.
For 15 years his whereabouts have been a mystery.

Sun reporters thracked him down to an apartment in Budapest using information provided by the Simon Wiesenthal Centre. They confronted him at the flat where he had been living quietly. When asked if he could justify his past, he looked shocked and stammered “No, no. Go away.” Questioned about his deportation case in Canada he answered angrily in English: “No, no. I don’t want to discuss it.” Our reporter asked: “Do you deny doing it? A lot of people died as a result of your actions.”

He replied: “No I didn’t do it, go away from here,” before slamming the door.
The atrocities that made him the most hunted Nazi war criminal still alive were detailed by the Canadian government when it stripped him of citizenship. The Justice Department’s war crimes unit said he was a “commander” in the Royal Hungarian Police in Kassa in charge of officers who guarded the ghetto.He supervised the drawing-up of lists of its inhabitants, conducted personal searches of Jews and confiscated valuables.The police transferred the Jews from the ghetto to a brickyard at the end of April 1944 and loaded them on to freight trains to Auschwitz and other camps.

In a summary of its case against Csizsik-Csatary the Canadian Government stated: “For at least two transports, he was present for the embarkation, checking the Jews’ names on a list.” Of the approximately 12,000 Jews gathered in the brickyard and deported, just 450 survived.
During the case, Csizsik-Csatary admitted to some involvement in the “ghettoisation” of Jews and said he had played a “limited role” in the movement of Jews to the brickyard.

He also admitted handing over at least two Jews to the Germans and to attending the last mass deportation of Jews out of Kassa.But his lawyers claimed he “did not know where the Jews were to be deported”.

There is little chance that  Csizsik-Csatary will face trial given his age and the reliability of witnesses after all this time - let's not even dwell on the response of a government that seems hell-bent on rehabilitating Hungarian-style fascism after all this time. That he was identified and doorstepped by journalists should send a message to him - "We know where you live and we will find you if you run again". That may not seem like much justice for his crimes but it's probably the best his victims are
going to get, sadly.

Also credit whee credit is due to the Sun. This is not its usual type of story (to say the least!)
Posted by jams o donnell at 11:09 am

Yep, it was a nice surprise from Sun, true. As for the man - let's hope he croaks soon. There is no chance for him being punished, not in the current atmosphere in Hungary.

I'm glad we were trying to kick him out of my country. But why did he have the opportunity to run away? He should have been watched closely after being discovered. Those Nazi war criminals had powerful friends who protected them and gave them refuge anywhere in the world. He should not be entitled to one more hour of life.

I hope he dies soon and disgraced, Claude. I can't see him even facing trial, sadly

It was a good piece of work by the Sun