The Brock/Calvert Project Finally Sees the Light of Day

I have been neglecting my Yahoo groups of late. I missed a post from Voiceprint records on Monday announcing the release of the Brock/Calvert Project CD. 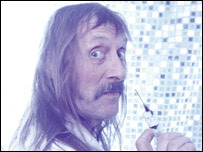 Dave Brock is the mainstay of Hawkwind and the last founder member still in the band. Robert Calvert (whose image I use as my avatar) was also a member of the band, co writing Silver Machine with Brock and appearing on some of the band’s best albums (Space Ritual, Quark, Strangeness and Charm and Hawklords). He was also a poet and playwright. Calvert died in 1988. I was very fortunate to see him twice at the Hammersmith Clarendon in the year before his death. I never saw him perform with Hawkwind.

Dave Brock had a cassette tape of Calvert’s poems for many years. Rob Ayling, the Managing Director of Voiceprint Records, and asked him to put some music to the poems. The album draws a line under marks the final collaboration between the two artists (I am sure something of the sort would have been done long before had Calvert not died). The album also features musical contributions from Hawkwind drummer Richard Chadwick, keyboardist Jason Stuart, and former bassist Alan Davey. 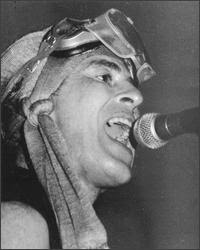 Two of the pieces, Small Boy and Ode to a Timeflower appeared on last year’s sampler album Take Me To Your Future . The album, which is issued as a limited edition of 1,000, is available online via a dedicated website.

I've bought my copy. I would imagine it will sell out pretty quickly.
Posted by jams o donnell at 3:25 pm

I have not heard of either of these I am afraid...

Here from Michele's this time, although I was here earlier today for the post above. She sent me back!!!

Hawkwind and Calvert are are acquired tastes, no doubt They are tastes I acquired in a big way!

First saw Bob with Hawkwind around 1977 (Quark era) He spent half of the gig as Lawrence of Arabia & the second half as Biggles. I was captivated by his aura. I was 15 and he was like a God! They played for ages, the encore alone must have been 40 minutes. During the show the bouncers had tried to keep everybody under tight control - this involved several outbreaks of fighting. At one point it got so bad the band stopped playing and Calvert shouted at the biggest of the security guys (who was sporting a huge beard)- "Hey fungus face, leave 'em alone"
With this the bouncers gave up and in a fit of pique actually gestured to the crowd to get on stage (as had briefly happened earlier)...so we did!
Thusly the show ended with band & audience packing the stage.
Happy days
Titus

Wow that must have ben a great night. I never got to see Calvert play with Hawkwind - my first time seeing them was 1979 - but I did see him in 1987 and in 1988, not long before he died. The gigs were a bit shambolic but I was glad I saw him live.

Saw Calvert with Hawkwind & Hawklords about 8 times from 76-78. Best live band in the world at that time, even with constant line-up changes. Pity there's no film/video of the Atomhenge and 25 Years shows. I'll never forget Bob doing Steppenwolf in black top-hat, overcoat and scarf in the dry-ice fog. Mesmerising drama, great music. Bob Calvert was a true genius. The Charisma years were Hawkwind's best.

I really wish there was footage too, I was a little too young to see the Hawks with Calvert (My first concert was at the Electric Ballroom in December 1979). I was glad I saw him a few times in 87 and 88. THe last time must have been shortly before he died.

I've just been listening to that Manchester '77 show, where Calvert lays into 'fungus face' with what can best be described as 'industrial language'! It's been torrented on dime and is an excellent show, with lots of audience enjoyment. Yeah, RIP Bob,

That sounds great. I must try and get on Dime.

interestingly, the band don't actually stop playing 'Reefer Madness' while Bob berates 'fungus-face', they kind of tread water and the rhythm section continues, and Brock does some low-level riffing while Calvert uses the C word and the audience cheer :)