My Dog’s got two noses. How does it smell? Very well actually 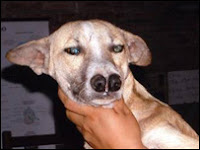 Explorer Colonel John Blashford-Snell has reported his discovery of a two-nosed dog (named Xingu) in Bolivia. The explorer came across the animal, named the Andean double-nosed tiger hound, while studying a crater on behalf of the Scientific Exploration Society.

Sightings of such dogs have been made before, but when the explorer Colonel Percy Fawcett told people in the UK in 1913 what he had seen nobody believed him. Colonel Blashford-Snell convinced vets in the UK of the dog's existence and a team including vets went back to study it. Tests have proved that it was not a physical malformation but a specific breed of double-nosed dog.


His theory is that the dog – which is unsurprisingly has a great sense of smell – is descended from the Pachon Navarro a breed of hunting dogs found in Spain at the time of the Conquistadors. Blashford-Snell described the dog as "Not a terribly handsome dog, but he's certainly very intelligent."

according to a BBC report the dog’s best friend was a wild pig called Gregory...Please someone tell me that today is 10 August and not 1 April!

I wish I had a best friend who was a wild pig named Gregory. What adventures we could have ...

... Back in the real world, I've looked up some pics of the Pachon Navarro [no relation to Dave] and its nose doesn't look quite the same. There's a clearly defined separation between Xingu's noses, but some of the Spanish dogs merely look like they have a deep cleft in a single nose. Why this interests me, I really don't know, considering my lack of love for doggy beings. Are there any double-nosed cats?

I was completely ready to believe you had adopted a canine! Silly me :)
Do you think if you have a cold in one nose, you have one in the other, too? ;)

amazing story..if i had read it elsewhere i would think it is a joke.

I be you'd tear up the Gower Siani,you and Gregory your porcine pal! Can you imagine a cat with two noses? The little buggers would be able to smell your thoughts!

To be honst Bengbeng, I looked at this story and thought someone was having a laugh!

I am just a little bit scairt of that dog.

Luckily he's a long way away!

A dog with two noses whose best friend is a pig. This sounds like a children's story gone wild.

Earl the cat is not afraid of dogs, humans, racoons, possums, but is terrified at missing a meal or a snack.

My Dauchsie doesn't have 2 noses, but he does have FIVE legs..hahahahahahaha!
Jen

He sure is cats!

Interestingly our four suffer from the self same phobia as Earl!

I've always wondered why dachsies yap a lot. Having one's tackle bump against the ground would make anyone irritable!

Any news on the Abyssinian Wire-haired Tripe Hound?

Ah Roger there is only one Gnahser!

Oh he is cute, it was bad of them to say he's not handsome!

I am sure he is handsome in his own way but can you imagine two cold noses pressing into you?

Double the crotch sniffing power! My Reagan is envious.

That struck me too ewbl.. can you imagine the turbo bost a dog would get when inhaling our crotch scents? It mst be dog heaven!