An Athenian, a Spartan and a Macedonian walk into a pub... 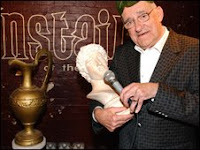 I meant to blog this last week but, hey, better late than never. The BBC website had an item about An ancestor of Monty Python's famous Dead Parrot comedy sketch has been found in a joke book dating back to Greece in the 4th Century.

Philogelos: The Laugh Addict, which has been translated from Greek manuscripts, contains 265 jokes are attributed to a pair of jokers called Hierocles and Philagrius. The book has been translated by William Berg, an American professor of Classics. "The text of Philogelos comes to us from several manuscripts ranging from the 11th to the 15th Centuries," Berg said. All of them trace back to an earlier original, probably - judging from the content and language - from the 4th Century,” he said

Their manuscripts have been published into a multimedia online e-book, which features video of veteran comic Jim Bowen bringing the old jokes back to life in front of a 21st Century audience. Some of the jokes are strikingly similar to modern ones, with subjects including farts, sex, ugly wives and a dimwit referred to as "a student dunce".

"One or two of them are jokes I've seen in people's acts nowadays, slightly updated," said Bowen. "They put in a motor car instead of a chariot - some of them are Tommy Cooper-esque,"

Jokes in the book include:

• Someone needled a well-known wit: "I had your wife, without paying a penny". He replied: "It's my duty as a husband to couple with such a monstrosity. What made you do it?"

• An Abderite sees a eunuch talking with a woman and asks him if she's his wife. The guy responds that a eunuch is unable to have a wife. "Ah, so she's your daughter? "

• A misogynist is attending to the burial of his wife, who has just died, when someone asks: "Who is it who rests in peace here?". He answers: "Me, now that I'm rid of her!"

Hmm, well there you have it.... Click here to see Jim Bowen telling the jokes

who knew that monty python relied on the ancient greeks for laughs? :)

There's obviously nothing new under the sun.

I thought some jokes were ancient but not that ancient!

I bet they were all in Bob Monkhouse's notebook!

The old ones are the best!