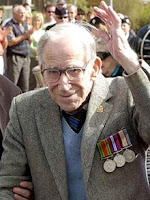 Yesterday’s Telegraph reported the death of Sydney Lucas, one of the last British veterans of WWI. Lucas, who joined the Sherwood Foresters just before the end of the war, died at the age of 108 in Rosebud, near Melbourne, Australia.

Born in Leicester in 1900, he was conscripted into the army in August 1918 and was still in training when the war ended in November. He emigrated to Australia in 1928 and went on to serve in the Second World War with the Australian Army

In a 2005 interview he spoke about his experiences in the First World War."We trained with a mix of fear and excitement, so when the war ended before we'd completed our training it almost felt like an anticlimax. We wanted to fight for our country, but I think that was more to do with boyish immaturity. My enduring memories are of being constantly cold, dirty, exhausted, homesick and lonely."

His death leaves the number of known British veterans of the Great War at five, including one veteran, Ned Hughes, who only recently came to light. The three surviving veterans still living in Britain - Henry Allingham, 112, Harry Patch, 110 and Bill Stone, 108, - are expected to lead a two minute silence at the Cenotaph on London at 11am on Tuesday, Nov 11, the 90th anniversary of the end of that terrible conflict. The other surviving British veteran is Claude Choules, 107, who also lives in Australia.

As the years go by... Lets hope they are not forgotten!

I hope not either Cherie. It won't be long before the last veteran is dead though

Sympathy. One aside - interesting in Melbourne having a name "Sydney". Name wasn't Sidney, was it? Also, dying near Rosebud is a nice way to go. Don't know if you know that part of the world but the Nepean peninsula has some lovely parts - Dromana, Rye, Tootgarook and Blairgowrie to name a few. He would have had a happy life in his latter years.

I don;t know the area, I've never been to Australia. It sounds like a great place to live James

Wow Jams - that is history for ya, what a great write up!